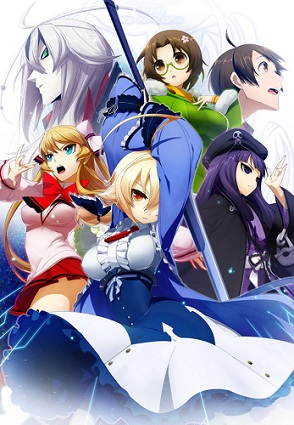 A new legend... Begins with the "Azure."
The children who resisted fate's designs.
The mysterious organization that guides destiny.
The "Azure Power" that surrounds and transcends everything.
The wheel of fate is now beginning to turn...
— XBlaze's First Trailer
In the past, there was a girl that was a doll.
She gave her body to the god, and saved the boy she loved.
However, the tragedy didn't end.
The thorns known as death binds his body, and refuses to let go.
Advertisement:
Inside the eternal solitude, the girl learned about the boy's fate, and together with despair disappeared into the darkness.
— Nobody in XBlaze Lost: Memories's PV

In the year 2050, there was the protagonist, Touya Kagari, who lives in Neo Yokosaki City. One day, he follows a mysterious ringing sound into the Restricted Zone, which had been quarantined after an incident ten years earlier. Inside, he comes upon an injured man crying out and groaning in pain. As Touya approaches, the man suddenly changes and attacks him. A wall explodes as the man lets loose a horrible roar, which seems to be synchronized with the ringing of the bell. Unable to comprehend the situation, Touya attempts to run away and escape.

Just when he thinks all hope is lost, a young girl appears and repels the attacker. The Azure Maiden easily wields a massive sword. Her name is Es. Seithr, Drive, D-Progressor Union, Ensis Librarius Imperium... Touya's peaceful life is turned upside down by a series of confusing, unbelievable events. The wheel of fate is turning.

XBlaze Code: Embryo is a Visual Novel created by Arc System Works. XBlaze is a prequel to BlazBlue, which set 150 years earlier, according to series producer Toshimichi Mori. The game was developed by the BlazBlue team and was released on July 25, 2013 for the PlayStation 3 and PlayStation Vita. The game was localized and released on June 24, 2014 in North America by Aksys Games.

A sequel, XBlaze Lost: Memories, was released on April 9, 2015. This story is about a girl who is referred as "Me", who lives in Ishana together with her sister. One day, her sister disappears, so Me goes into her father's workshop and somehow enters the phantom field were she meets with a mysterious girl known as Nobody, and together with Nobody, Me searches for sister while observing memories through "pieces of memories".

Tropes pertaining to Code: Embryo include:

Tropes pertaining to Lost: Memories include: