Video Game / A Link to the Past: Randomizer 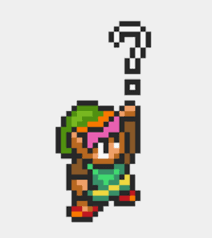 The basic "randomizer" alters a) the locations of inventory items and b) which dungeons hold the crystals needed to reach the final boss, Ganon. Not only are items found in different locations (and in a different sequence) in each "seed", but the tools needed to progress in the game also differ. To prevent the randomizer from generating a seed which renders the game unwinnable (such as placing a item in a location which can only be reached with the help of said item), the code has a built-in logic containing various checks and failsafes to ensure that "progressions" can always be obtained in one way or another (unless the player chooses the "no logic" setting - which still almost never results in an unbeatable seed, as long as the player knows the requisite glitches: the Japanese 1.0 release of A Link to the Past that the randomizer uses as its base is extremely broken).

In addition to the basic randomizer, there are many optional settings that allow for randomization of nearly every aspect of the game. These include (but are not limited to):

The randomizer site itself has a gigantic list of resources

; it is highly recommended for new players to peruse this list. This document

is specifically aimed at newcomers to the randomizer.

Having a location/item tracker is practically required to avoid getting lost, particularly in the more complicated modes, unless you have an eidetic memory. Even then, the randomizer will seed new progressions that otherwise may not have occurred to you. EmoTracker

is a popular one for Windows: it has packages for this and most other popular randomizers (it defaults to installing the Link to the Past package). A list of other trackers can be found here

. There is also a web-based tracker for the Super Metroid crossover randomizer here

. For more convoluted entrance shuffle settings, it will probably also help to take notes on all the entrances either in a text file or a spreadsheet, just so you don't have to waste valuable time retracing how you got to Dark Death Mountain without the flute, hookshot, gloves, or mirror.

The randomizer is used as the basis for speedrunning tournaments wherein players are given the same seed and face off against each other in races. These races are technically 'fair' as far as RNG is concerned, but since neither player knows in advance where all the progressions are (or even which items are required to win), it boils down to working out the quickest route based on items encountered on the way. Winning requires both intimate knowledge of the game and a degree of luck. Although it's possible to "read" a seed to predict the most likely outcome, the seed may flip the script and place items in a place which is both unlikely and time-consuming to reach. (The worst outcomes are affectionately known as "troll seeds.") For instance, a non-entrance randomizer seed might hide the Mirror on Kholdstare, the Ice Palace boss. Let's say the Mirror is required to enter the Swamp Palace and claim the item needed to climb Ganon's Tower; fighting Kholdstare as soon as possible is more likely to yield a progression and win the race, but it's a huge gamble which hinges on the quality of execution i.e. minimizing deaths.It has proved popular enough that similar randomizers have been created for:

, although the code branches have since diverged substantially.note SMZ3 and ALttPR no longer even use the same programming language. Items from one game may appear in the other, and there are four gateways between the two games. Several of the features present in the Link to the Past randomizer (such as the entrance randomizer, the Enemizer, and Inverted mode) unfortunately aren't yet implemented in SMZ3; however, Keysanity was implemented in 2021, and developers are apparently working on entrance and enemy randomizers. In any case, many of the tropes native to ALttPR still apply to SMZ3. One particularly cool thing about SMZ3 is that, due to a quirk in the games' memory allocationnote Which is so unlikely to have happened coincidentally that it strongly suggests Nintendo at one point intended to sell a combination Link to the Past / Super Metroid cartridge (unfortunately, this never happened), it can be played on an actual SNES. It was later followed by a Zelda 1 / Metroid multiworld randomizer (which, unfortunately, doesn't work on an actual NES). Now all we need is a Breath of the Wild / Metroid Prime 4 multiworld randomizer.

The randomizer community also has a Discord server

, where you can keep up with the latest development and tournament news. Separate Discord servers exist for the SMZ3 randomizer

The randomizer provides examples of: