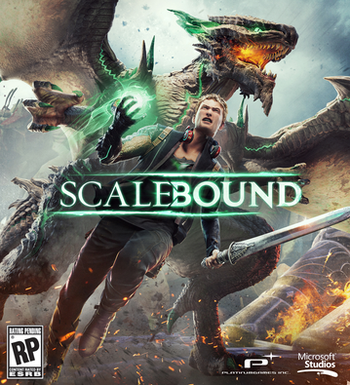 Scalebound was a planned Action RPG that was developed by PlatinumGames to be published by Microsoft Studios for the Xbox One.

Players would have assumed control of a young man named Drew as he progresses through the world of Draconis. Drew is bonded to and accompanied by a fire-breathing dragon called Thuban, who can be commanded in battle, carry Drew as he flies, and assist Drew in the field. Players would have been able to customize Thuban's appearance as well. The two would travel the world to defeat the powerful enemies that threaten Draconis, Earth, and a vast universe of parallel worlds. Unlike other games developed by Platinum, the game was planned to emphasize graphics and story over action.

The game was announced during E3 2014

. Originally planned for a Holiday 2016 release, PlatinumGames later stated that Scalebound would have to be delayed into 2017

in order to "deliver on [their] ambitious vision." However, Microsoft would confirm in January 2017 that the game was cancelled

, following rumors of troubled development. Nevertheless, as recent as 2022

, Hideki Kamiya has expressed his desire to one day return to the project.