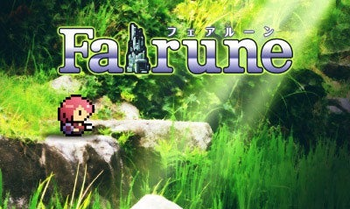 An adventure filled with mystery awaits her.
Advertisement:

Originally released for smartphones on March 28th, 2013, and rereleased twice, first for the 3DS on December 18th, 2014 and later for the Playstation Vita on April 27th, 2016. Fairune 2 released for the 3DS on October 20th, 2016. A prequel to Fairune was released even earlier (earliest known record on August 19th, 2011 according to Wayback Machine) under the same name as a Flash game, which became Fairune Origins as part of Fairune Collection, released May 17th, 2018 along with a new side game Fairune Blast.

Fairune Origins stars a then-unnamed hero as she set out to rescue four Fairies and seal the soon-to-awaken Demon King.

Fairune 1 stars Hope Girl, a random girl in a pretty dress called upon by the Ancient Codex, a talking bestiary who explains that the three Spirit Icons, which once sealed away a realm of darkness, have up and disappeared, causing strange events to happen, ultimately resulting in the world being overrun with monsters, which is described as a custom that happens ever few hundred years. After grabbing the bare necessities of her adventure and swapping her white dress for leather armor and a Sword of Hope, Hope Girl sets out to find the icons again.

Fairune 2 starts off with the Codex noting that no crisis is currently threatening the land, and again calling upon Hope Girl to find three fairies, protectors of Fairune which have gone missing. Over the course of the adventure, Hope Girl meets a mysterious girl living in a ruined room stuck in perpetual twilight, with machinery around and agrees to help her find Storage Devices to restore her memory, while trying to find out what exactly is trying to invade the world of Fairune.

Fairune Blast takes the shmup-based final boss concept from Fairune 1 and 2 and stretches it into a 20 second score attack minigame, where Hope Girl, Yamato and Uzume take to the skies to gun down monsters and bosses from both Fairune and Kamiko.

Both games take a top-down perspective with puzzles to solve and enemies to defeat in a clear homage to old adventure games such as The Legend of Zelda, Hydlide, or the World of Mana series.

Not to be confused with Fei Rune, a character from Inazuma Eleven.

The Fairune series contains examples of: