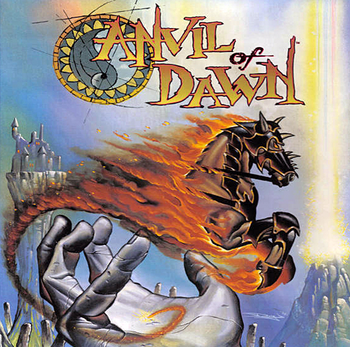 Anvil of Dawn is a Western RPG for PC, developed by DreamForge and published by New World Computing in 1995.
Advertisement:

The plot is simple: the armies of the evil Warlord have overrun the world of Tempest, and you are being teleported behind the enemy lines from the last besieged castle of the Lady, ruler of Tempest, on a desperate mission to kill the Warlord or destroy the source of his power, before the last bastion falls.