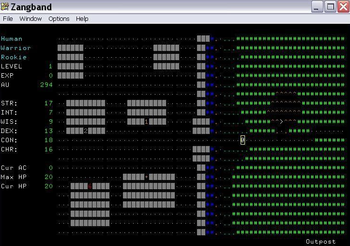 The title of this game is short for Zelazny Angband, and it is a variant of the roguelike Angband. Whereas as the former was Inspired by... The Lord of the Rings, this one is mainly inspired by the fantasy novels of Roger Zelazny (especially his The Chronicles of Amber series), though it keeps some of the LOTR elements.

Like most such roguelikes, it's been worked on for a long time, with the first version being in 1994, and the last official version

2.7 getting released in 2003. In all, it builds enormously upon Angband, adding about 30 more playable species, and setting the game's overworld in a huge, interactive wilderness.

Unlike most roguelikes, this game (and most of the other *bands) does little to reduce Level Grinding. There is nothing to stop you sitting around on the first dungeon level and whacking at a self-replicating worm mass until you reach experience level 50, except that it'd take you about a million years. It admits in the documentation that maxing your stats is pretty much the objective of the game (although it does have a real objective; to slay the Serpent). In other words, this is a game for the player who likes to level grind.

As per its predecessor, levels are NOT persistent; once you leave a dungeon level, you will never find that same dungeon level again (and anything you left there is gone forever). Some quest dungeons in some versions avert this, though they reset when you exit them.