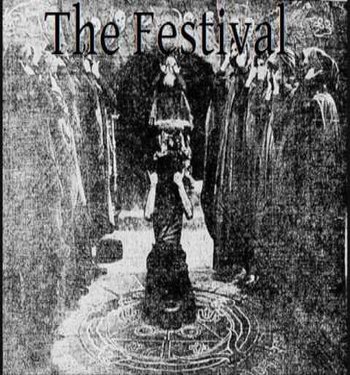 Cursed the ground where dead thoughts live new and oddly bodied, and evil the mind that is held by no head. Wisely did Ibn Schacabao say, that happy is the tomb where no wizard hath lain, and happy the town at night whose wizards are all ashes. For it is of old rumour that the soul of the devil-bought hastes not from his charnel clay, but fats and instructs the very worm that gnaws; till out of corruption horrid life springs, and the dull scavengers of earth wax crafty to vex it and swell monstrous to plague it. Great holes secretly are digged where earth's pores ought to suffice, and things have learnt to walk that ought to crawl.

"The Festival" is a short story by H. P. Lovecraft. Written in 1923 and published by Weird Tales in 1925, it tells the story of an unnamed narrator who travels to the New England town of Kingport, where his ancestors had lived. It was by their wishes that the family line must keep the town's centennial Yuletide festival alive, and it now falls upon our unfortunate protagonist to take part in this mysterious event.

The story is noteworthy among Lovecraft's work for featuring the Necronomicon in a greater capacity than usual, to the point of concluding with a passage from the fictional book.