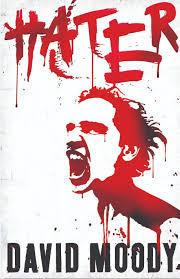 Hater is a book by U.K. author David Moody

Something is wrong with society these days. The news gives reports of people just suddenly deciding to kill other people: enemies, strangers, coworkers, friends, family. Random. Brutal. For seemingly no reason.

Enter the protagonist, The Everyman: He lives a mundane life, married with children, slaves away for a paycheck under a miserable bitch of a boss. He stops going to work and barricades himself with his family inside their home until it's over because he starts seeing people mowing down other people in real life, on the street and at work, not just on television, which has basically gone off the air, and is now displaying the message, "REMAIN CALM DO NOT PANIC TAKE SHELTER WAIT FOR FURTHER INSTRUCTIONS THE SITUATION IS UNDER CONTROL".

Minor Spoilers... It turns out that almost half the people on the planet suddenly develop an Us Versus Them mentality, and divide people into those who kill and those who don't, and then kill those who don't. Those who do kill are called Haters, and seem to get just slightly stronger and smarter than they were before their transformation as a self-aware Hater, and the only advantage that non-Haters have is greater numbers. Haters can sense who is a Hater and who is not. Non-Haters cannot sense which team a person belongs to. Haters can sense other Haters even before they become a self-aware Hater. What's the cause? Mental illness? A government experiment gone awry? Is it Mother Nature's population control? The mystery is still unsolved by the end of the book.

MEGA SPOILERS.. the main character pulls a And Then John Was a Zombie by suddenly realizing that he is a Hater. He has a wife and two sons and a daughter, and his father-in-law is staying with them as the steadily escalating crisis heats up outside. The only other person in his family that is a Hater is his daughter, though she doesn't know it yet. He kills his father-in-law, and then attacks the rest of his family to get his daughter away from them, but his wife brains him and escapes with all of the children. He's quickly picked up by the authorities and taken to a facility, forced to wait in a long line, not knowing his fate, but finding an identity among the Haters. He finally gets to the front of the line and realizes that he's at an extermination camp as he's hurried into a gas chamber with a dozen other Haters. Suddenly, a wall explodes and he escapes the gas chamber because there are Haters in the military and other authoritarian positions, and those Haters are trying to protect their own. They've usurped a helicopter and blown up the gas chamber with a missile and rallied the Haters outside to fight against their captors. He escapes and sees that the Haters are fighting the non-Haters, and he helps wage an epic, revolutionary battle against non-Haters, ultimately gaining the upper hand and turning the tables on the non-Haters, greatly reducing their only advantage of greater numbers. Our hero feels refreshed and more alive than he ever has, throwing off the shackles of his former life and "their" oppression and bigotry, because "they" still judge people on things such as looks and beliefs and nationality and gender and sexuality, etcetera. The Haters embrace and love everyone on his varied team of Haters across the world. He's confident, knowing that the so-called non-Haters are divided and weak, and knowing that the dawning of a new age has come that presents a very ironic utopia of love amongst the global family of Haters.

The The Film of the Book is currently in Development Hell.