Literature / The Devil All the Time 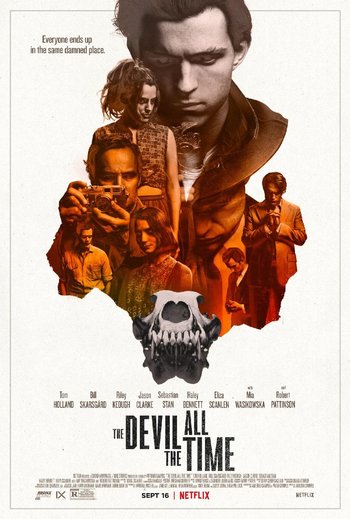 "What I'm about to do, I do because I have to. Not because I want to."
"Now, if you asked most people where Knockemstiff, Ohio, or Coal Creek, West Virginia were, they probably couldn’t point them out to you on a map. But I guarantee, they’d be there all the same. How and why so many people from those two piddling places on that map could end up connected has a lot to do with our story. Some would claim it was just dumb luck, while others might swear it was God’s intention. But I’d say with the way things turned out, it was a little bit of both."
— The Narrator
Advertisement:

Donald Ray Pollock's 2011 novel set in the 1950s and 1960s Midwest. Set in rural southern Ohio and West Virginia, The Devil All the Time follows a cast of compelling and bizarre characters from the end of World War II to the 1960s. There’s Willard Russell, tormented veteran of the carnage in the South Pacific, who can’t save his beautiful wife, Charlotte, from an agonizing death by cancer no matter how much sacrifi­cial blood he pours on his “prayer log.” There’s Carl and Sandy Henderson, a husband-and-wife team of serial kill­ers, who troll America’s highways searching for suitable models to photograph and exterminate. There’s the spider-handling preacher Roy and his crippled virtuoso-guitar-playing sidekick, Theodore, running from the law. And caught in the middle of all this is Arvin Eugene Russell, Willard and Charlotte’s orphaned son, who grows up to be a good but also violent man in his own right.

The Devil All the Time contains examples of:

"But he was good at fighting. Maybe that's where he belonged."

Alternative Title(s): The Devil All The Time