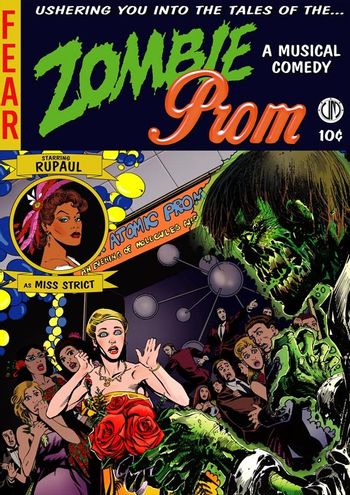 Jonny Warner, a rebel who spells his name without the customary H, is the new transfer student at Enrico Fermi High School. He falls in love a with good girl named Toffee, the first woman who's ever loved him. Toffee's parents and principal Miss Strict pressure her to break up with him, and when she does, Jonny commits suicide by riding his motorcycle into a nuclear plant. He comes back as a zombie, and wants to take Toffee to the prom. Miss Strict, however, does not want any zombies at her high school ruining the order that she's established. Jonny teams up with fame-seeking reporter Eddie Flagrante to campaign for zombie civil rights. It turns out that Miss Strict has a few secrets in her past that she wishes to keep under wraps...
Advertisement:

Zombie Prom was originally an off-Broadway musical, and was made into a much-abridged film featuring RuPaul as Miss Strict.