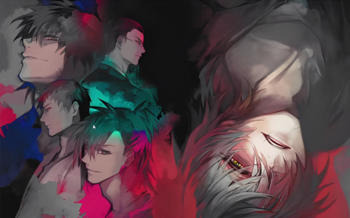 A torn wound and a desire. note Characters from right to left (clockwise): Towa, Rei Izumi, Takuma Murase, Kei Madarame, and Ryou Fujieda
"The human heart is soft, like a fistful of fine sand. So you must be very careful with how you handle it."
Advertisement:

Slow Damage is a Japanese Boys' Love Visual Novel developed and published by Nitro+CHiRAL, making this their fifth work. The first press edition released in Japan for Windows PCs on February 25, 2021, though customers who ordered through the official Nitroplus Online Store received the game on February 17, 2021. Nitro+CHiRAL's scenario writer, Fuchii Kabura, returned to work on this game alongside artist Uiro Yamada, who has been credited as staff on previous Nitroplus titles. The visual novel has been picked up for an official English-language translation by JAST BLUE, which was released on November 14, 2022.

Slow Damage takes place at some point during the 21st century in the fictional ward of Shinkoumi, which is located in Tokyo, Japan and was previously a part of the Tokyo Bay City No. 13 subregion. The country is in the midst of a recession and, in an attempt to resolve these economic troubles, the government repurposed this area as a large-scale casino resort due to its historic prosperity. This ward is governed by the corrupt Takasato-gumi, whose only interest is their own financial gain.

The story follows Towa, a resident of Shinkoumi who lives his life in a carefree and apathetic manner, showing no concern for his future. The only thing that captures his interest is painting—more specifically, painting the innermost desires of other people.

A manga adaptation illustrated by Misaka Niumu which covers the events of Chapters 0 and 1 from the visual novel began distribution on July 7, 2020 and ran for 11 chapters before concluding in 2021.

Slow Damage also has a spin-off called Slow Damage: Clean Dishes which focuses on a different set of characters but still takes place in Shinkoumi.