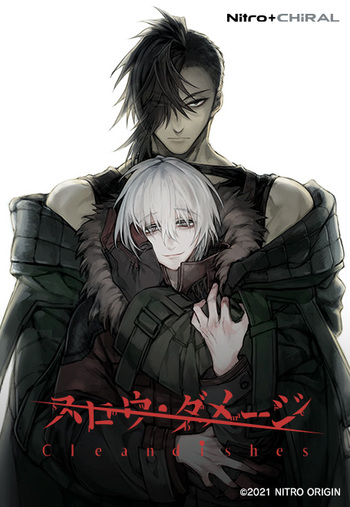 Slow Damage: Clean Dishes is a mobile visual novel and is a spinoff of Slow Damage. It was released on April 27, 2021 on both iOS and on Android.

For Clean Dishes, Fuchii Kabura returns as the scenario writer. Uiro Yamada provides the character design of the protagonists, whilst Sakurako Yamada (who was previously credited as a staff artist) takes the helm this time around as the main artist.

The story is as follows: Shinkoumi, a special administrative region of Japan ruled by the Takasato Group, is a city of rampant crime propelled by the country’s crippling recession. Here, fights and murders are a daily occurrence. In such a city, a certain presence is vital. Enter Clean dishes.

Clean dishes, also commonly known as "Sara-ya," is a cleaning service that tidies up the rooms where people have died, by suicide or by other means. The story revolves around Baku, a worker at Sara-ya, and his partner Shiro, who is eager to die.