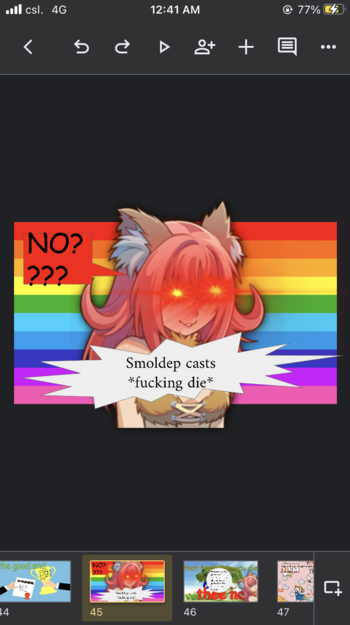 is a Google Slides Visual Novel written by Athanasynt/Ash S. It is notable for Stylistic Suck, making you question your life decisions

, and for having been created with a presentation maker.

Technically, this is a Spin-Off series. However, the original game featuring Smoldep as a side character, An Extreme Adventure, is not out for public release and was made by Athanasynt’s friend TampliteSiphronKents to be shared in their puny little social circle.

The game begins with Smoldep, a Cat Girl whose sprite is ripped from RPG Maker VX Ace, interrupting the player character’s Inner Monologue to shill her RPG and her Youtube channel.

That’s when the illusion of free will appears! (The phrase Lampshade Hanging the VERY limited options and endings in the game.) It even comes with bad stock images!

Given that there is only one Good Ending and that all the other endings lead to the same Game Over page, this would fit better in the Visual Novel sub-genre of a Kinetic Novel.