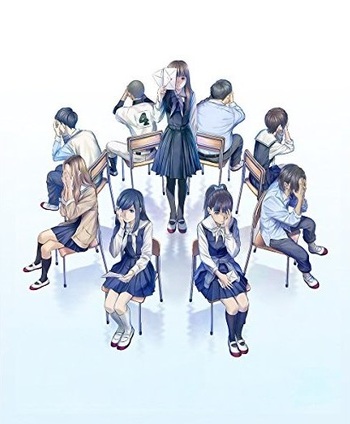 Guess no one wants to see the truth.
Advertisement:

Root Letter (stylized as √Letter) is a Point-and-Click visual novel that revolves around the mystery of Aya Fumino, Takayuki “Max” Nakamura’s old high school penpal who went missing 15 years ago. On receiving her final letter 15 years late, in which she confesses to a murder, Max sets off to Shimane Prefecture to unravel the mystery of what happened to her. Reminiscing through previous letters from Aya, Max must piece together the truth, alongside the testimonies from seven witnesses and high-school friends who knew her. Did she really murder someone, was she telling the truth in her letters – was she even real?

Gameplay mainly consists of traveling to various locations and using the mouse to find points of interest, picking up and using items along the way. At the end of most chapters, you will encounter one of the seven friends and will need to get the truth out of them in an Investigation segment, an Ace Attorney-style boss battle where you must ask the correct questions and present the correct evidence to get at contradictions in their words. Also interspersed is Max Mode, where you must choose between four different responses of increasing severity to find the correct one. Finally, which route you enter after the common route is determined by the responses to Aya’s letters you pick at the beginning of each chapter, and each route gives wildly different answers to the big mystery.

Root Letter was released in 2016 for Playstation Vita and Playstation 4 with additional releases on the PC and on the iOS and Android smartphone, developed by Kadokawa Games and published by PQube for North American and European Audiences. This is the first game for KG's planned "Mystery Adventure Game" series, with RL being first in line. The game is a bit unique from most visual novels as it's one of the few Japanese-made VN games that reflects on places outside of Tokyo, stars an adult (over-30) protagonist, does not take place in a school setting, and is a Roman à Clef story — all places and people in the story are either real or based off of a real place/person in Matsue.

A live-action project based on the game, starring Danny Ramirez (Top Gun: Maverick) and Keana Marie, has been filmed in 2019 with production rights handled by AMMO, a Japanese-based production company and its American subsidiary, AMMO Entertainment. Entertainment Squad handles the film's worldwide distribution rights and will release the film on September 1, 2022 (both theatrical and digital VOD).

Last Answer is an expansion to Root Letter, using live-action scenes, actors and visuals as an option while having scenes that further explain the endings, released in Japan in December 2018 and worldwide in 2019.note Only the Japanese/Chinese releases have the Vita versions.

Root Film serves as the game's sequel, still set in Shimane Prefecture. It was released in Japanese on July 30, 2020 and in other countries/regions in local languages on March 19, 2021 for the Playstation 4 and the Nintendo Switch.