Visual Novel / Rose in the Embers 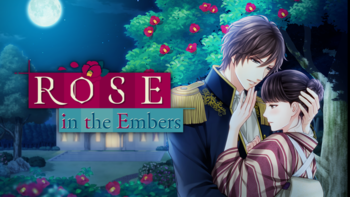 Rose in the Embers is a Romance Game Visual Novel by Love 365 for iOS and Android devices.

The protagonist is a young woman born and raised in the farming village of Nagano during the Taisho period (circa 1912). After her father falls ill and her family is unable to afford treatment, she sells herself as an indentured servant to the strict owner of the Koibaroh Inn, located in the Capital. However, the protagonist soon realizes exactly what sort of inn she works at, when a 'noble' guest tries to force himself on her and the madam of the Inn makes it clear that she is fully expected to comply. The protagonist fights off the lecherous guest and causes a commotion in the Inn. It is when the madam is about to throw her out that the capricious Lord Kyosuke Takatsukasa offers to pay the madam double the protagonist's price.

With cash flying everywhere around her and guests scrambling to pick up the pieces, the protagonist finds herself being owned by this earl's son, to be his possession or be given to one of his friends: Takahisa Togo, the cold and aloof Imperial army captain; Misao Higuchi, the lascivious dilettante painter who lives in Koibaroh Inn; Tsukumo Kobayakawa, the snarky mystery author; or Atsuro Shibusawa, the kindly owner of the local Omurice Cafe.

As the protagonist finds her feet in the Capital and learns more about her employer, she soon discovers herself falling in love with whoever she ends up serving. But with the strict social classes of the time period in place, can this unlikely Cinderella and her chosen prince find happiness?