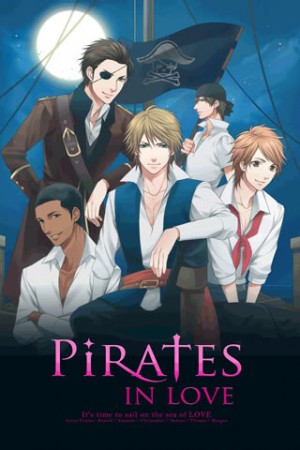 Pirates in Love is a Romance Game Visual Novel by Voltage, Inc., and the first of their games to receive an English-language release.

Through a series of mishaps, the protagonist - a plucky young bar wench - finds herself inadvertently stowed away on the pirate ship Sirius. Her presence is soon discovered, and the captain of the Sirius summarily drafts her into service as a member of the ship's crew to join them as they sail the seas in search of hidden treasure.

There's just one problem - the Sirius doesn't have a bunk to spare.

The heroine is left with no choice but to choose which one of the Sirius pirates to room with:

Whoever she chooses, she's got her work cut out for her.

In 2017 Voltage released Pirates in Love: Captain's Cut, a re-localized English version of the app using the original Japanese character names and unmodified artwork. The original localization was retired in 2018, and Captain's Cut was transferred into Voltage's Love 365 library app.

Pirates in Love features examples of: