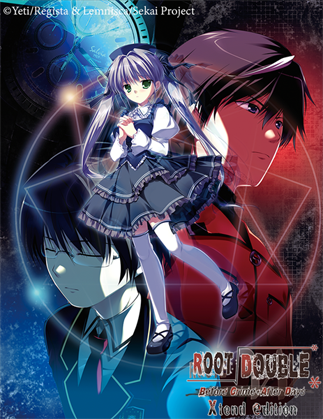 Would you destroy everything for someone else?
Would you kill someone for the sake of everything else?
Advertisement:

A 2012 sci-fi Visual Novel created by Regista and published by Yeti, it is the work of Takumi Nakazawa (of Infinity series fame), and written by Team Tsukishima. The English version of the Xtend Edition PC port was released by Sekai Project on April 27, 2016 on Steam, which can be found here

, followed by a PlayStation Vita release in March 2018. The Kickstarter campaign to fund the localization can be found here

The story takes place in September 2030. In this world, psychic powers have been scientifically proven to exist, with psychics suddenly being born all over the world starting in 2014. This power is known "Beyond Communication", which functions as a form of telepathy, and people with this power are known as "Communicators". A particularly large concentration of Communicators is located in Rokumei City, an academic city with practically unlimited freedom for scientists to research whatever they want, making it a popular spot for them. However, the city itself has very strict security laws, and residents are not allowed to leave the city except under very certain circumstances and conditions.

The game is divided into two routes: Root A, and Root B. Root A tells the story of Watase Kasasagi, the leader of a rescue team group named "SIRIUS". On September 16th, 6:16 A.M., an emergency occurs in the "6th Laboratory of Atomic and Biological Organization", nicknamed LABO, and SIRIUS is sent to deal with it. While there, Watase suddenly comes a "monster". Overcome with intense pain and an indescribable fear towards the monster, he runs away, only to black out in a hallway. When he wakes up, he is greeted by his subordinates, Lieutenant Kazami Tachibana, and new recruit Jun Moribe. However, he realizes he has lost his memories. As it turns out, LABO has been completely sealed off from the inside, and the LABO itself is full of radiation due to a meltdown. Despite this, Watase decides to take action and continue the search for any remaining survivors in LABO...

Root B tells the story of Natsuhiko Tenkawa, an Ordinary High-School Student who is a Communicator. He, along with two of his friends, Mashiro Toba and Louise Yui Sannomiya (nicknamed "Salyu"), rush into LABO the day of the incident, only to hear the explosions, remarking that they're "too late". Natsuhiko's group goes down to the basement floors to see if they can do anything, only to be stuck in a fiery hallway. They run out and find a clear hallway, when all of the sudden, Natsuhiko sees his childhood friend Yuuri Kotono (who lives at his house) standing in the hallway. They don't get to talk long before Natsuhiko notices an explosion about to occur, and grabs Yuuri. He then finds himself trying to escape LABO while repeatedly experiencing flashbacks of the 6 days prior to the incident...

When both routes are cleared, they unlock the final two routes, Root C and Root D, which answers the game's many mysteries and provides the conclusion to the story.

Root Double is unique amongst visual novels in that it doesn't have a traditional choice system where the player chooses between two or more prewritten options. Rather, it uses a system known as the "Senses Sympathy System". With this system, the player is occasionally prompted to adjust an Enneagram graph, which shows the protagonist's trust levels with other characters and themselves. By adjusting the trust levels, they can change the outcome of various events in the story, determine whether or not you avoid a Bad Ending, and whether you head for a Good Ending or the Normal Ending.