Warning: Tropes names are unspoilered and may imply heavy spoilers. Tread carefully if you haven't beaten the game.

open/close all folders
The Nine Souls 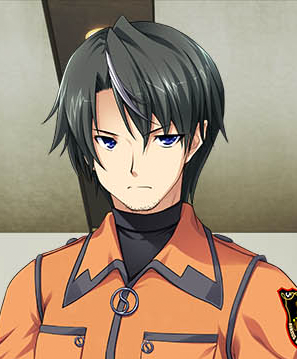 The protagonist of √A. He is the captain of the rescue squad dispatched to the incident at "LABO" at the request of the city.

...Or so he's heard, as he's lost his memories due to encountering some sort of trouble.

It appears he had a composed and logical (to put it in a bad way, dry) personality before his amnesia, but naturally, he doesn't remember that.

The story of √A begins with him waking up in LABO. With him and his companions trapped in a desperate crisis without an escape route, he could not have awoken in any worse circumstances. Prepared to do or die, he tries to search for survivors and a way out of LABO, but the situation just gets worse by the moment….

Can he carve a path through this extreme situation? And what of his memories...? 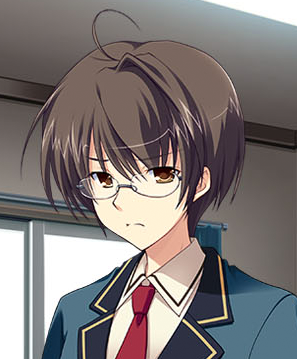 A boy bound to the past
√A Side: -NO DATA-
√B Side: "Self-righteousness just leads to danger."

The protagonist of √B. A high schooler living in Rokumei City who's quiet and hates standing out in any way. He is by no means emotionless, but he rarely shows any passionate emotions.

He is the one who is there in body, but not in spirit, as he always seems to be gazing somewhere far off. He tends to simply stick to his daily routine. He is very sensitive and quite perceptive of others' emotions. He gets very tired of being a part of groups, and is often alone.  His mother, Miyoko Tenkawa, is a renowned scientist who is so busy at work that she rarely comes home. Therefore, Natsuhiko essentially lives alone.

It a seems that as a child, he was rather cheerful and mischievous, the opposite of his current self... He somehow gets trapped in LABO on September 16. 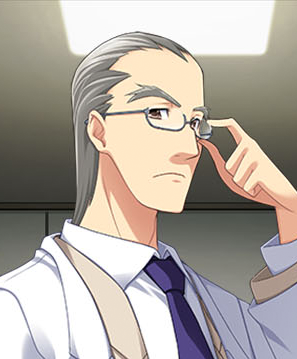 A perfectionist and a honest researcher
√A Side: "Go ahead and laugh. It may be a fragile justice. But it's my choice."
√B Side: "But no matter what happens... promise me you kids won't put yourselves in danger."

Natsuhiko’s neighbor who works as a researcher at the research institute LABO, as something along the lines of an assistant manager. He seems like an inflexible old man, but he’s brimming with a sense of justice, and is an honest man who can be depended upon as long as injustice is not at play.

He got trapped in LABO after the explosion on September 16 when he failed to evacuate in time. It seems he feels a sense of responsibility for the incident as a member of the facility’s staff. 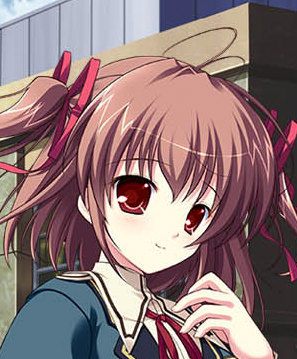 A devoted childhood friend
√A Side: -NO DATA-
√B Side: "Well, if our voices couldn't reach him, why not directly appeal to his heart, if you catch my drift?"

Natsuhiko's childhood friend and neighbor. In √B, she is like Natsuhiko's own personal wife, albeit not actually married, in how she constantly takes care of him. Cooking is her specialty, though it's rough.

She's not just kind and gentle to Natsuhiko, but to others as well, and so is relied on by many others. On the other hand, she's bad at relying on others, and as such, has a bad habit of not telling her worries to others.

She’s very active in contrast to Natsuhiko and and tries to take him around to all sorts of places, but that’s because she’s hoping it’ll make Natsuhiko go back to his old self. She somehow gets trapped in LABO on September 16. 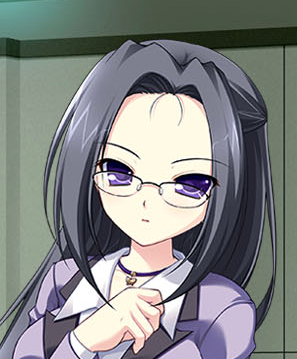 An aggressive and intelligent teacher
√A Side: "Don't be an idiot! If there's traces of a fire, that's all the more reason we should all be searching."
√B Side: "As a teacher, there's no way I can approve of students putting themselves in danger, can I?"

An egotistical and quirky teacher at Natsuhiko's school. She's quick-witted, an eloquent speaker, and a model when it comes to taking proactive action, so she's highly trusted by her peers.

She's still inexperienced as a teacher, but her passion attracts the students and draws out their motivation. However, she's too aggressive, and has a flaw of occasionally being willing to do anything to achieve her goals...

She somehow gets trapped in LABO on September 16. She doesn’t appear very compatible with the rescue squad, as she’s not all that cooperative with them and clashes with their opinions many times. 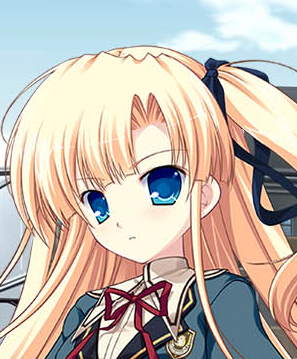 A noble yet mysterious girl
√A Side: "Don't come any closer."
√B Side: "I was sent here to protect you, after all."

Half-Japanese, half-French. "Yui" is her middle name, while "Louise" is her first name. "Salyu" is her nickname. A young yet bright genius who skipped two grades. She has a difficult to approach air about her that contains a mystique far removed from normal people. She is of very few words, and her expression rarely changes.

She's not oppressive, but nor does she attempt to make any friends of her own. Despite that, she appears actively conscious of Natsuhiko. She constantly carries a ferret mascot-type robot called "Alice".

She transfers into Natsuhiko and Masher’s high school early on in √B. It appears she’s a distant relative of Natsuhiko’s, as she moves into Natsuhiko’s house after she transferred. She somehow gets trapped in LABO on September 16. Furthermore, she runs away from the rescue squad after they find her and try to save her. A mysterious girl indeed. 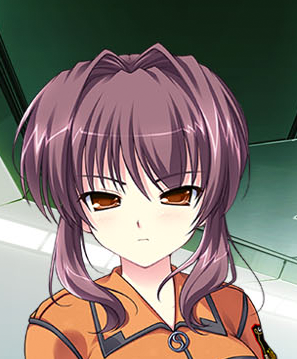 A cool and collected partner
√A Side: "Our mission is to ensure that everyone gets out of here in one piece."
√B Side: "Understood. Please stand back; it's too dangerous."

Lieutenant of the rescue squad team. She is a capable officer who has helped out her captain up until now. With Captain Kasasagi having lost his memories due to unforeseen trouble, she takes up the role of captain in his place.

Even in an extreme situation like that of √A, she never loses her composure and remains a woman with an iron core. 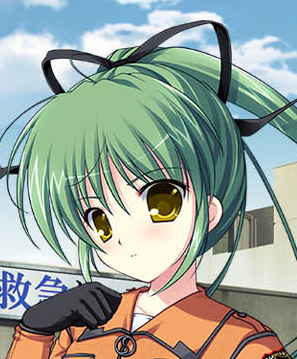 A fiery buddy
√A Side: "Don'tcha know, Captain? They call that the buddy system."
√B Side: "I always wanted to be the 'hero' who saves people instead of the 'heroine' who needs to be saved."

A rookie rescue worker. She's still a greenhorn, but no one can surpass her when it comes to passion.

She admires heroes of justice who defeated the strong and protected the weak, so she wants to become one. Having becoming an elite firefighter and rescue worker at her young age shows that she has outstanding talent, much like Kazami.

She is incredibly dexterous. Her nimble fingers allow her to free people trapped in machinery and untangle any mess of rope or cable during a mission when seconds count. Though it clashes with her image, she’s taken up knitting as a hobby to improve her dexterity skills. 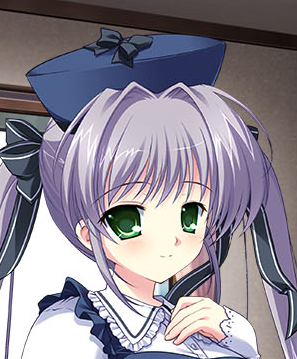 A girl who doesn't belong anywhere
√A Side: "I don't know what to believe anymore..."
√B Side: "Hey, what about you? Do you think you could keep a promise for 100 years?"

Natsuhiko's childhood friend. In √B, she lives at Natsuhiko's house for some reason. She's bad at household chores, so she's no help on that front.

In all truth... she is quiet and of few words, so she almost never talks to anyone. She eats dinner with Natsuhiko, and listens to what he has to say without talking back, and she's always on his side. But her presence is very comforting to Natsuhiko, and is precious to him.

She somehow gets trapped in LABO on September 16. In √A, she is rescued shortly after the start of the game. She keeps her silence and barely speaks to anyone, so no one can tell what she’s thinking. On top of that, she has bad reflexes and no stamina, so she’s mostly a burden.

Natsuhiko’s mother, and a top researcher at LABO. Due to her position, she rarely returns home, leaving Natsuhiko to essentially grow up by himself. On the occasions when they do meet, she comes off as a strict workaholic, and has a strained relationship with her son.

One of the other squad members of Sirius's Team A, who is paired up with Hiyama at the beginning of the rescue operation and splits up from Kazami and Jun.

One of the other squad members of Sirius's Team A, who is paired up with Dojima at the beginning of the rescue operation and splits up from Kazami and Jun.

An omnipresent "spirit", so to say, created from WX particles that became the key of the experiment that was about to be conducted by Yuuri and Miyoko during the day of the LABO incident.

A French woman and the first S-Rank Communicator found in the world. She was invited to Rokumei City to escape persecution in her hometown, but she was eventually N-ified and caused the Great Rokumei City Arson. She was then confined in LABO, where she died a year afterwards.

Watase's twin sister, who died after saving her twin brother during Great Rokumei City Arson when the hospital the latter was in was burning down.

Ena's father. A commissioner of ESP Bureau in charge of Communicator A, he died protecting her from a knife attack.

A researcher in Parapsychology Research Center of Rokumei City and one of the researchers involved with Alice Enflamme. He was the one who pushed the establishment of LABO and the creator of AD anti-radiation drug, and was also implied to be the father of Louise Yui Sannomiya.

The leader of Q, a prominent anti-BC group that was responsible for many major events of the story.

A mysterious white-haired girl who appears dead in front of the cargo lift in Area 6. She is Kazami Tachibana's younger sister, whose death was faked nine years ago so that she could be taken to LABO for experimentation. After reading 351 people's minds, she became N-ified and lost her individuality, turning her into little more than an incarnation of pure malice.