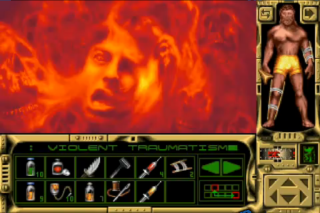 ..... SESAME UNDER WATCH - CAUSE OF DEATH : VIOLENT TRAUMATISM
Advertisement:

In the middle of the twenty-second century, humanity continues to flourish... to the point that the Earth and several of its colonies are already over-populated. To try and combat this problem, the AWE (Alien World Exploration) is founded. Its members go through intense training in hopes of earning the right to become a Robinson. Robinsons have no contact with the public or the outside world during their five-year tour of duty: those five years are spent exploring unknown planets, learning as much as they can about these alien environments and determining whether or not they're fit for human colonization. If they survive this grueling, unforgiving ordeal, then they return to massive celebration and a public demonstration held in their honor: a Robinson's Requiem.

But not all Robinsons get to enjoy this heroes' welcome. Not even if they survive their tour of duty.

During their missions, Robinsons can run into all manner of hazards... including unknown viruses and potentially dangerous diseases. To ensure there's no risk of others being contaminated, these Robinsons are banished... or worse. You and a few other agents have stumbled across this Awful Truth — and your superiors suspect that you've learned too much. For your final mission before your Robinson's Requiem, you are sent to Zarathustra, a wild planet with no official record of its existence... or anything else.

Developed by the French studio Silmarils, Robinson's Requiem puts the player in the shoes of Trepliev1, an experienced Robinson on his last mission before retirement. A lot of thought and care went into the survival system, resulting in all sorts of nasty ways to die, from massive blood loss to food poisoning to hacking off your own limbs, it was later followed up by a sequel called Deus.

This Survival Sim contains examples of: