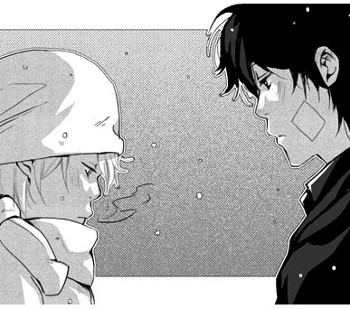 Black (the guy in white) and White (the guy in black)
"Grey is… not a color nor a feeling
Grey is… happiness
Grey is… a memory
Grey is.. a life
Between
you… Black…
& me… White"
— Poem by White about what grey is
Advertisement:

Grey is… is a slice-of-life web-comic about the friendship between Black and White, best friends who are the complete opposite of each other. Black is an angry young man who is controlled completely by his feeling, White is calm and collected and is ruled by his mind, together they balance each other out and bring contrast to each others lives.

However, that all changes when, seemingly without explanation White leaves Black. Two years later Black lives alone and works as a fashion designer, he comes home one day to find his door has been left open and White is standing in his apartment demanding a reunion hug.

The story explores their relationship as they both try to learn how to let go of their pasts and move on to a brighter future. The comic can be found here