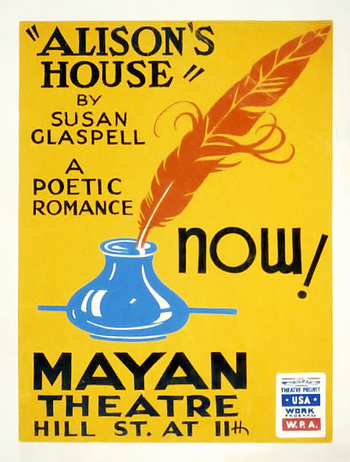 Alison's House is a 1931 play written by Susan Glaspell.

It is a thinly veiled account of the life of Emily Dickinson. In the play, set on December 31, 1899, she is "Alison Stanhope", and she has been dead for 18 years. The wealthy Stanhope family has finally decided to sell off the family home where Alison lived and wrote her poetry. Alison's sister, Aunt Agatha, is fiercely protective of Alison's memory. Alison's brother and family patriarch John Stanhope is selling the house in order to break free from the past and in order to take care of Agatha, who is not well. John's son Eben Stanhope is stuck in an unhappy marriage to Louise, while daughter Elsa has embarrassed the family by running off with a married man. Only son Ted, a cheerful young college student who was only two when Alison died, seems unaffected by her memory and the sale of the house.