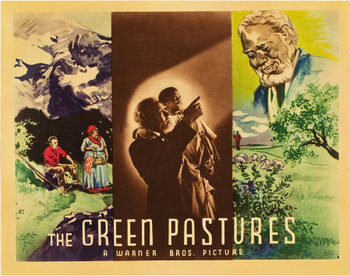 The Green Pastures is a 1930 play by Marc Connolly based on the 1928 novel Ol' Man Adam an' His Chillun by Roark Bradford.

It starts with a contemporary Black preacher, somewhere in Louisiana, giving a Sunday school lesson to children in his flock. When the preacher talks of heaven, the little kids ask him what Heaven is like. The preacher imagines a Heaven that's much like a social afternoon at a black church, with fish fries and ten-cent cigars.

The next scene is in Heaven—which is a fish fry, where God and the angels are eating fish and smoking ten-cent cigars. The play unfolds from that point as a series of vignettes telling the highlights of the Old Testament, staged as if they were taking place in the black community in Louisiana in the 1920s. Highlights include Adam and Eve in the Garden of Eden, Cain and Abel, and Noah's flood.

Made into a 1936 film co-directed by Connolly (in his only film credit), along with co-director William Keighley. The film was one of only six movies made by a Hollywood studio during the studio era with an all-black cast, featuring Eddie "Rochester" Anderson (before he starred in The Jack Benny Program) as Noah.