Film / I Wake Up Screaming 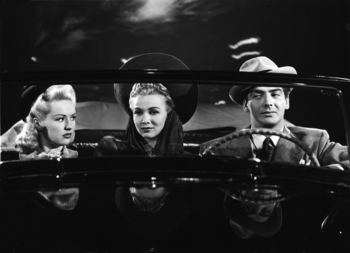 The film opens after the murder of Vicky Lynn (Landis), an aspiring actress. The prime suspect is Frankie Christopher (Mature), a promoter who discovered Vicky waiting tables, groomed her for stardom, but was disappointed when Vicky accepted a movie contract and told Christopher she was leaving him. Vicky's sister, plucky stenographer Jill (Grable) doesn't believe that Frankie killed her sister—but that may be because she's in love with him. With an intimidating detective, Inspector Cornell (Laird Cregar), determined to pin the murder on Christopher, Christopher and Jill have to find out who did it themselves.

I Wake Up Screaming was a Playing Against Type role for Grable, or at least a playing-against-genre role. This murder mystery film noir was unlike almost all of Grable's other films, which were light comedies where she sang and danced.