Film / I Walked with a Zombie 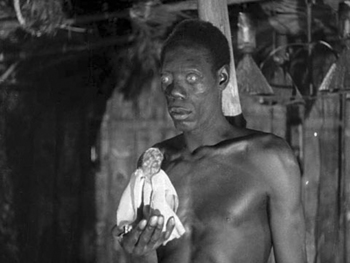 I Walked with a Zombie is a 1943 film produced by the master of 1940s cinematic horror, Val Lewton, and directed by Jacques Tourneur. It is a loose adaptation of Jane Eyre.

Betsy Cornell (Frances Dee) is a nurse who is hired by sugar plantation owner Paul Holland (Tom Conway) to come to the Caribbean island of St. Sebastian to care for Paul's invalid wife Jessica. After Betsy first meets the blank-eyed, shuffling Jessica (Christine Gordon), she is told that a spinal cord injury robbed Jessica of all volition and ability to control her actions. However, Betsy soon hears of a far darker and scarier explanation for the woman's condition, involving Jessica's affair with Paul's half-brother Wesley Rand (James Ellison), and an application of the ancient rite of voodoo...