Film / I Sell the Dead 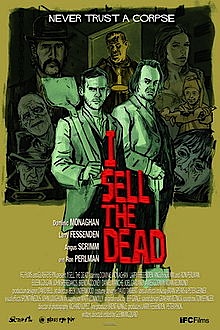 I Sell The Dead is a 2008 Horror/Comedy film starring Dominic Monaghan, Larry Fessenden, and Ron Perlman.

Dominic Monaghan stars as Arthur Blake, a grave robber who is in prison awaiting his execution at the guillotine. He is visited by Father Duffy (Ron Perlman), who wishes to record some of the events leading up to Blake's arrest. Blake begins with how he got started as the apprentice to Willie Grimes (Larry Fessenden), regaling Duffy with the impoverished nature of their original work over the years, and eventually telling how they jumped into the business of trafficking undead corpses.

I Sell The Dead contains examples of