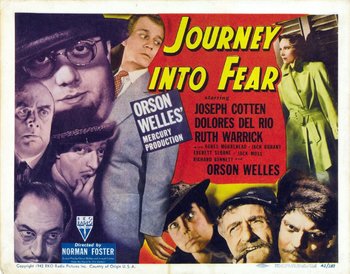 Howard Graham (Cotten) is an American armaments engineer seeking to supply Turkey with naval guns. While he is in Istanbul with his wife Stephanie, Howard is lured away by Kopeikin, a man who claims to work for Graham's company. Kopeikin takes Graham to a nightclub with a magic act, and the magician calls Graham onto the stage. This is all an elaborate murder attempt, but the assassin, a creepy rotund man with glasses named Banat, accidentally shoots the magician instead.

The murder investigation brings Graham to the office of the chief of secret police in Istanbul, Col. Haki (Welles). Haki says that Banat works for a Nazi spy, Muller, and that the Nazis want to kill Graham to stop Turkey from getting the armaments. Graham must immediately flee across the Black Sea to the Soviet Union, then allied with the United States. Graham does so, leaving his wife behind in Haki's care, only to find that the murderers are on the boat too.

Journey into Fear was originally supposed to be the third film Welles directed for RKO, following Citizen Kane and The Magnificent Ambersons. Welles brought in his entire Mercury troupe—Cotten, Agnes Moorehead, Ruth Warrick, Everett Sloane, and others—but found himself spread too thin between finishing Ambersons, making this film, and starting on documentary It's All True. Welles brought in his protege Norman Foster to handle directing duties. Latter-day historians consider this film to have been co-directed by Foster and an uncredited Welles.note This was when things started to go downhill for Welles. Of the three films listed above none were completed as Welles desired, as he wound up quitting both Ambersons and this movie to make It's All True, which was never finished.

Based on a novel by Eric Ambler. Joseph Cotten wrote the screenplay, for the only writing credit of his 40-year movie career.