Film / I Wanna Hold Your Hand 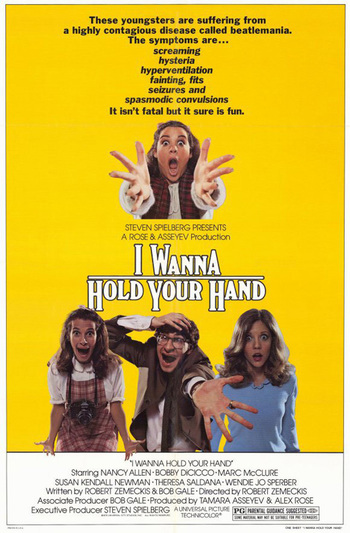 "YEAH, YEAH, YEAH, I wanna hold yer GLAAAAAND....."
"I want you to be prepared for excessive screaming, hysteria, hyperventilating, fainting, fits, seizures, spasmodic convulsions, even attempted suicides; it's all perfectly normal. It merely means that these youngsters are enjoying themselves."
— Ed Sullivan, in the intro note played by impersonator Will Jordan
Advertisement:

It's February 9th, 1964, and The Beatles are bringing the fever of Beatlemania to the United States for the first time. Specifically, it's the band's debut on The Ed Sullivan Show, and they're about to be greeted with a history-making reception in America (and potentially go deaf from their newfound fanbase).

This movie follows a group of teenagers—hysterical fangirl Rosie (Sperber), recently-engaged Pam (Allen), aspiring photographer Grace (Saldana), Beatle-hater Janis (Newman), obnoxious bully Tony (Di Cicco), and Larry (McClure), who's driving—as they travel from Maplewood, New Jersey into Manhattan on their quest to see the Fab Four in person, both for their appearance at the Ed Sullivan Theater and at the hotel where they're staying. Upon arriving in the city, they have to contend with a rabid crowd of Beatlemaniacs outside the hotel, a ton of security, and Richard (Deezen), a Beatles superfan. Hilarity Ensues.

The soundtrack features many early Beatles hits: "I Want to Hold Your Hand," "Please Please Me," "I Saw Her Standing There," "Twist and Shout," "Money (That's What I Want)," "She Loves You" and much more.