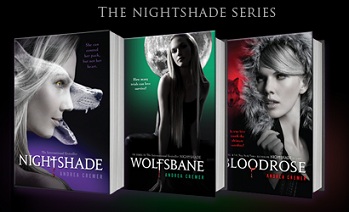 Nightshade is a paranormal romance trilogy by Andrea Cremer. It has expanded into two prequels and three novellas.

The original trilogy (Nightshade, Wolfsbane, and Bloodrose) follows the story of Calla, a young Guardian - a shapeshifter who is able to turn into a wolf. All her life, she's known her place: as a Guardian, her duty - and that of her family and friends - is to protect the Keepers (who are said to have created the Guardians when a wolf saved the life of a Keeper) from their foes, who are known as the Searchers. The war has lasted as long as anyone can remember, and each side has a different story. As part of her duty, Calla is to be mated to another young Guardian, Ren Laroche, on her next birthday, but when she, against the laws of the Keepers, saves the life of a hiker - a teen her age named Shay who, unbeknownst to her, is The Chosen One destined to destroy the Keepers - her entire world is turned upside down. A fourth book, Snakeroot, takes place after the main trilogy and features the Searchers Adne and Logan.

The prequels (Rift and Rise) tell the story of how the war between the Keepers and the Searchers originally started. Ember Morrow has known all her life that she is pledged to serve the knights of Conatus beginning at her sixteenth birthday. When the knights realize that one among them is dabbling in dark magic, Ember must choose whether to follow the path of darkness, or to escape the order and pledge her life to destroying her fellow knights.