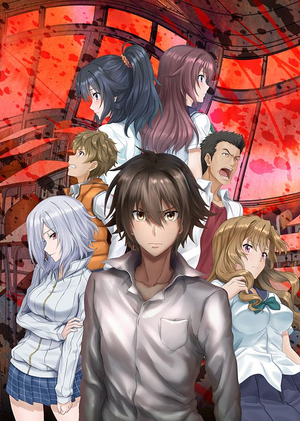 One night, the students in Nobuaki Kanazawa's class all receive a strange text message. It announces the beginning of the "King's Game", in which the entire class must participate. The mysterious King will issue a command every day which must be completed by midnight. Withdrawal from the game is forbidden. Failure to comply will result in punishment.

No one takes the game seriously at first, but the initial commands are harmless so they comply. However, when two students refuse their command, the King sends out a text announcing that their punishment is death. When their deaths are announced the next day, the students realize that this game is real. As the bodies pile up and the commands keep getting worse, Nobuaki must find and stop the sadistic King's game before he and his entire class lose their lives.

Originally a cell phone novel by Nobuaki Kanazawa (who shares his name with the protagonist), it has since been adapted into a manga by Renda Hitori, as well as a film adaptation directed by Norio Tsuruta. The film adaptation stars members of idol groups Berryz Kobo and °C-ute and focuses more on Nobuaki's girlfriend Chiemi Honda. An Animated Adaptation by Seven began airing as part of the Fall 2017 Anime season.

Not to be confused with the 2004 Danish political thriller, which has the same English title.