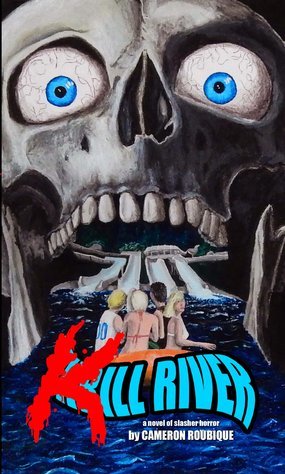 Kill River is a 2015 horror novel written by Cameron Roubique, who specializes in 80's slasher stories, and it is his debut novel. A sequel was officially released on, fittingly, Friday the 13th of October 2017. A third novel was also released on June 11th, 2020.

In the summer of 1983, thirteen year old Cyndi is forced by her parents to go to a summer camp in order to curb her antisocial tendencies. The music loving punk girl is none too happy about this, realizing she'll be the oldest girl at camp, but finds herself with no choice but to attend. On the trip over, she quickly meets the other oldest kids at camp, wealthy Stacy and troublemakers Brad and Zack, all aged 14. Cyndi's taken aback when the pretty and obviously popular Stacy approaches her, and the two become fast friends, making Cyndi's stay at camp better than she thought it would be, even though some of the counselors are extremely strict towards the teens due to Brad and Zack's inability to stay out of trouble in all their years going to camp.

After a good day goes awry because of the boys, the teens are given a harsh punishment, leading the group to the desperate measure of running away from camp. After a night of rafting and sleeping in the woods, the group becomes lost and eventually reach a water park under construction in the middle of the woods. The teens find themselves unable to resist the temptation of enjoying the already finished rides before trying to find help, but soon enough things start going wrong. Why are the rides turned on despite the park being deserted? Why is it deserted despite being under construction? Did they just see someone lurking around that corner? Soon enough the teens realize they're trapped in the park with a merciless masked killer. The brightness and fun of the water park is gone, now only horror and death remain.