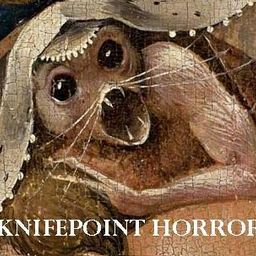 Knifepoint Horror is a horror short story series/podcast by Soren Narnia. Here is a description from the website:
Advertisement:

"These tales of supernatural suspense by Soren Narnia adhere to the most primal element of storytelling: a single human voice describing events exactly as it experienced them. The stories, stripped of even proper titles, spill forward as taut, uninterrupted confessions. Knifepoint Horror leaves nothing but the story's riveting spine to compel and chill you to the core."

The stories are available as podcasts at this address:http://knifepointhorror.libsyn.com/

and available in both print and e-book format from amazon.

Due to the suspenseful nature of the series, beware of unmarked spoilers.