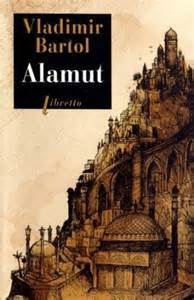 "Until now I've trusted to my statesmanship. But now I'm going to see what faith can accomplish."
Advertisement:

Persia, 1092. Young, poetic ibn Tahir leaves his village for Alamut with the intention of becoming a soldier. There he is trained not just physically, but also mentally, with courses in science, literature, and radical Islam. After much brutal physical training and intense study, ibn Tahir finally becomes an elite fedayeen, a group of young soldiers fanatically devoted to Alamut’s leader, Hassan ibn Sabbah.

Elsewhere, beautiful young slave girl Halima is brought to just outside Alamut and sold to ibn Sabbah. He takes her to a secret garden behind Alamut, where to her confusion she is dressed in nice clothes and placed with other girls in a class where they are taught seemingly unrelated subjects. But there is a purpose to all of this: Halima is being trained to play the role of a houris, a virgin of paradise.

What neither of them know is that they are both pawns in Hassan ibn Sabbah’s insane plan, by which he intends to pit his small, but unreachable, fortress against the vast Seljuk Empire.

He is going to handpick certain members of his ascetic fedayeen, inform them that they’ve been granted a glimpse of paradise, and then give them a pill of hashish (concentrated opium). They’ll wake up in the garden, surrounded by all sorts of wonders they’ve never even heard of, and between that, the hashish, the willing houris, and some applied psychology, the fedayeen will sincerely believe that they’ve been transported to paradise. Another hashish pill will put them under, and they’ll wake up back at Alamut. There ibn Sabbah will order his fedayeen, now in drug withdrawal, to kill a single highly guarded enemy. Of course, the assassin will surely die, but they’ll go straight to paradise for all eternity if, and only if, they succeed.

Written by Vladimir Bartol in 1938 Slovenia, Alamut is one of the great novels of his language. It incorporates all of the (false) stories and legends that surround the historical Hashshashin, and uses them to weigh some heavy philosophical issues.

It only recently has been translated into English, and was one of the main inspirations for Assassin's Creed.