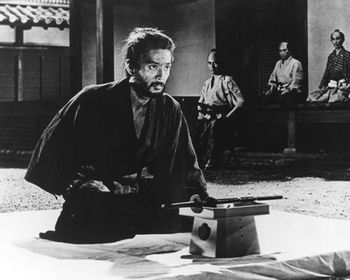 "Chijiiwa Motome was a person of some acquaintance to me."

Harakiri is a 1962 Jidaigeki film directed by Masaki Kobayashi and starring Tatsuya Nakadai. It was made as a Deconstruction of the glorified samurai code of honor usually associated with that genre.

Set in the aftermath of Japan's Sengoku Period, with the whole of the country united under the Tokugawa shogunate, many Samurai are left destitute in an era of peace that no longer needs them. Some turn to an ignoble method of making money: They ask permission to commit Harakiri in the courtyard of one of the great nobles' houses, but with no intention of going through with it, instead hoping they will be given alms and sent on their way.

The story begins in 1630 with a ronin named Hanshiro Tsugumo arriving at the gates of the Ii clan, asking to use their courtyard to commit seppuku. Suspicious of Hanshiro's motives, they initially receive him with mistrust and contempt, but as he tells his story it becomes increasingly clear that he's more of a threat to them and their beliefs than they could have imagined.

In 2011, Takashi Miike directed a re-make titled, Hara-Kiri: Death of a Samurai.

Not to be confused with the trope Harakiri, which features prominently.