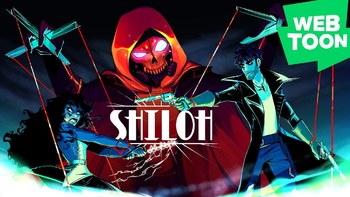 A Supernatural Noir Thriller webcomic featuring a ensemble cast of characters residing in the seemingly Utopian colony of Shiloh or around the outskirts of the colony known as "The Sticks". The Story begins with a murder within the streets of Shiloh by the infamous serial killer known as "The Marked Man". The mysterious forces of Shiloh and The Sticks begin to ensnare around the Marked Man and his enigmatic group of bandits, along with the "Jackets" assigned to bring him to justice and in over their heads.

Created by Kit Trace & Kate Flynn, it can be found on Webtoons.