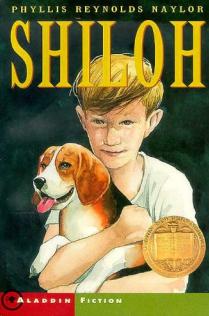 Shiloh is a children's novel written by Phyllis Reynolds Naylor in 1991. It received the Newbery Medal award in 1992 and has three sequels: Shiloh Season, Saving Shiloh, and A Shiloh Christmas. The first three books have been adapted into movies. The books, especially the first one, are quite commonly an assigned book for reading in schools.

The story follows Marty Preston, an eleven year old boy who lives with his family in the small town of Friendly, West Virginia. One day he finds a lone beagle near his house, which follows him around and eventually goes home with him. Connecting with the dog, Marty dubs him Shiloh after an old abandoned school nearby. However, he soon learns that the beagle belongs to his drunken and somewhat violent neighbor, Judd Travers, and is forced to give Shiloh back. After seeing Judd's cruel treatment of the dog, Marty decides to take matters into his own hands and takes the dog back, caring for it in secret. Soon, he is faced with many moral and ethical problems concerning Shiloh.