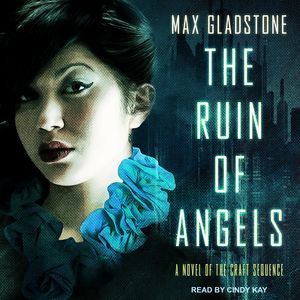 Ruin of Angels is the sixth installment in Max Gladstone’s Craft Sequence. According to Gladstone, this book represents the beginning of "season two" of the Sequence. From this point forward, the series will focus on an overarching plot that will move forward in a linear fashion, hence the lack of ordinal numbers in the title.

Kai, the banker-priestess introduced in Full Fathom Five, makes a business trip to Agdel Lex, a city divided between different cultures and different layers of reality. There she receives a cryptic request for help from her estranged sister, Ley, who then goes missing after apparently committing a murder. Kai begins to explore the city’s hidden layers, hoping to find her sister before the authorities do. Meanwhile, Ley schemes with her ex-girlfriend Zeddig, the leader of a group of outlaws who recover cultural treasures from the time-frozen wasteland hidden beneath Agdel Lex’s surface, to organize a venture of legendary proportions and prevent catastrophe from befalling the city.

Preceded by Four Roads Cross. See the series' page for tropes that are common to the whole Craft Sequence.

Ruin of Angels provides examples of the following tropes: