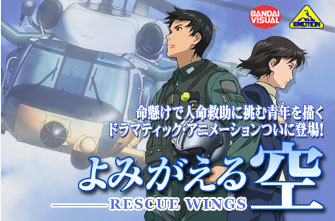 "It is my duty as a member of the Air Rescue Service to save [lives] and aid the injured. I will be prepared at all times to perform my assigned duties quickly and efficiently, placing these duties before [personal] desires and comforts. These things I do [so that] others may live."
— Code of the Air Rescue Mannote This is seen on the Japanese DVD covers
Advertisement:

Yomigaeru Sora — Rescue Wings is a 2006 Rescue anime series produced by J.C. STAFF which aired on TV Tokyo for a total of 12 episodes with one episode only released on DVD. It centers on a JASDF fighter pilot officer who was suppose to be assigned to fly fighters when a transfer notice came to be a SAR pilot instead.

2nd Lieutenant Kazuhiro Uchida joined the Japan Air Self Defense Force to fly fighters, but was instead transferred to fly helicopters. Reporting to Komatsu Air Base, he begins to learn the ins and outs of a Search and Rescue pilot, while coming to terms with his lost dream.

The anime has a live-action movie version that was released in 2008 known as Sora e-Sukui No Tsubasa RESCUE WINGS-, which was significant since actress Yuko Takayama (Haruka Kawashima) was in the leading role when she was still 15 years old. The movie took some elements from the anime and from the Rescue Wings Zero manga.

While the DVDs are not sold in recent years, a Blu-Ray release was released on November 2018 to coincidence with the 60th anniversary of the foundation of the JASDF's Air Rescue Wing.

The anime contains examples of: