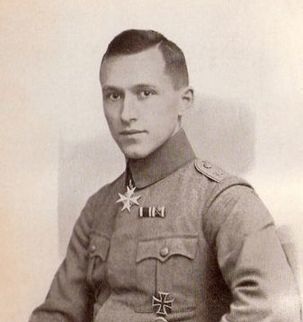 Ernst Jünger as a lieutenant during World War I.
Ernst Jünger (29 March 1895 – 17 February 1998) was a German veteran of both World War I and World War II as well as an author and intellectual, and an avid entomologist. Born in Heidelberg in 1895, he ran away from home to join the French Foreign Legion. When World War I broke out, Jünger returned home to fight on the Imperial German side. Enlisting as a private, after his first battle he went to officer's school and became a lieutenant, holding this rank throughout the war. He was wounded numerous times and awarded the Pour le Mérite, Imperial Germany's highest honor.
Advertisement:

He wrote down his experiences during the war in an autobiography titled Storm of Steel. In stark contrast to fellow author Erich Maria Remarque's own take on the conflict, Jünger presented the war as an adventure, and he was (he claimed) not negatively affected by it at all. A staunch nationalist, he was highly critical of the Weimar Republic. A hard man to nail down in terms of his politics, despite his disdain for the Weimar government, he was not a big fan of the Nazis, either, and was against them using Storm of Steel for propaganda purposes. Nevertheless, when World War II broke out, he served in the Heer (army) as a lieutenant, mostly in occupied France.

As a result of his nationalist views and his service in the Wehrmacht, Jünger remained a controversial figure in postwar 1940s-1950s Germany. Many of his countrymen suspected he secretly sympathized with Nazism, his earlier disdain for the regime notwithstanding. Nevertheless, Jünger would also refuse to submit to an official denazification procedure, and as such he was banned by the British occupying forces from publishing any writings for four years. After retiring from military service, he wrote several fiction and non-fiction books, including the science fiction novel The Glass Bees. His writings were also surprisingly popular in France despite the germanophobia the two World Wars left in their wake.

He lived a remarkably long life, becoming a Catholic at the age of 101 (Jünger came from an agnostic family and had not held any particular religious beliefs prior to this). He died in Riedlingen in 1998 at the age of 102 as the last living bearer of the military version of the order of the Pour le Mérite. He also ended up outliving both of his children, Ernst Jr., who was killed in Italy in 1944, and Alexander, who committed suicide in 1993. His final home in Wilflingen, Jünger-Haus Wilflingen, is now a museum.