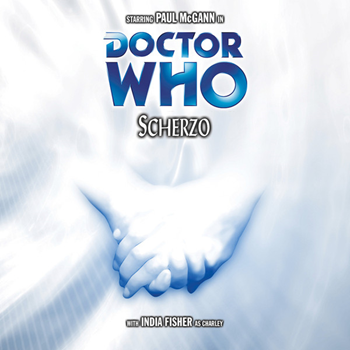 Every good story has to come to an end...
Advertisement:

A Psychological Horror Bottle Episode by Robert Shearman. This story marks the beginning of the Divergent Universe arc that continues up to "The Next Life". It is also one of the rare main range stories that have no other characters other than The Doctor, his companion, a dead thing and the Monster of the Week. Even the TARDIS is missing after the characters leave it.

It also contains one of the most emotional exchanges between The Doctor and his companion in any Doctor Who medium.

Once upon a time, there was a king who forbade all that offended him. First dissidence, then the rise of the waves, the wind, and finally music. But life without music is torture, so he sent messengers to the land of the dead — by hanging, by knife, by slow poison — to retrieve music back. When that failed, he bled himself empty to go fetch music by himself. But upon returning, music had seen too much of the other side, and destroyed the kingdom in anger.

In the aftermath of "Neverland" and "Zagreus", the Eighth Doctor finds himself in an unknown part of the Divergent universe. His time senses are painfully rendered useless, his memory is still recovering from Zagreus, and worst of all, Charley is in the TARDIS with him, making his attempted Heroic Sacrifice for her in "Neverland" completely pointless. Shadows have infected the console room. The outside is searing, blinding light, a piercing screech, a dulling of the senses. The Doctor forces Charley to make the choice for both of them, and they head outside, into the unknown. The TARDIS vanishes. Charley's senses are numbed; she's blinded, overcome by the piercing light, and more scared than she's ever been. The Doctor experiences the same thing, with many more senses than the regular human ones suddenly being dulled or cut off completely. Blind and terrified, they walk along, hand in hand.

Charley feels it's been over half an hour since the Doctor spoke to her. He tells her it's been over 38 hours of continuous silent walking. To stave off madness, and with his time senses removed, he'd been keeping silent to count his number of heart beats relative to his footsteps and deduce the passing of time. Charley can feel a glass wall on either side of them, but the feeling is uncertain and dulled, and there is no smell, no taste, no hunger, no exhaustion, no pain. Just the walking. They stumble over an amorphous mess of flesh and bared organs: something dead. The Doctor uses Charley's brooch — which she once got from her mother as a family heirloom — to dissect it. A voice cries "Help me". They walk on.

There is still the giant elephant in the room: the Doctor told Charley that he loved her. He clarifies that he meant the kind of love that comes with a Heroic Sacrifice. The kind of love that would have allowed him to die so she could live, not the kind of love that would require difficult conversations on the topic. He mocks her desire to talk about love as though it would be more important than their impending death. And he tells her he would never love her the way she wants him to. The strange voice repeats their words back to them, picking fragments of the most heartfelt anger and fear from their conversation. It strings their words together into hollow phrases.

They stumble on another dead creature, slightly less amorphous. The Doctor realises that, with their hunger dulled, they'll need to remember to eat. Using the brooch, he cuts the creature into chunks of food — and as they eat with absolute horror, their sight returns just slightly, and their senses are briefly returned to them. With the blinding light coming back as soon as they're done eating, they walk on in the glass corridor again. The Doctor still doesn't want to talk about love. But he's angry. Because his big Heroic Sacrifice was all for nothing, now that Charley has refused to live a normal life without him. And Charley has burdened him with her own presence.

The Doctor is starting to believe that the Time Lords may have been right all along. They always told him that his companions weren't really his friends: they were just reminders of his own mortality.

Weeks, or possibly months later. The dead food has become fish-like, then reptilian, and finally mammalian. The two feed, and each time they do, the disembodied voice around them attacks their throats. It nibbles on their flesh and blood and feeds on their sounds. They let it. All they can do is live on, find meaning, imagine some grand scheme or evil villain that's toying with them, a puzzle to be solved. They struggle to avoid feeling Happiness in Slavery. The voice imitates them and the sounds of the TARDIS, but still can't convey meaning.

One day, walking hand in hand, they realise that they too have evolved. Their hands have become fused together. Their blood vessels have connected, their feelings transfer freely through both of their bodies. The food is humanoid now, delicate, and when their sight briefly returns a little so they can eat, they see that it has Charley's face. The Doctor begins to eat regardless. But Charley can't bear the thought, because it reminds her of what her brooch symbolises: one day, she was to give it to her own daughter, who would in turn pass it on to her daughter. And that can never happen now. She and the Doctor have become a single organism, forced to walk and feed and be fed on forever. Until they realise that the glass corridor is circular. The dead thing was always the same dead thing.

The Doctor agrees that things have to come to an end now, and he decides to overfeed the sound creature on what it wants: the centre of their sound, their throats. Charley uses the brooch to slit the Doctor's throat, and the sound creature attacks it eagerly. But he can still speak, and although his vocal cords are bared and dangling out of his neck, they're protected from harm. The creature wants something else still. The Doctor tells Charley that he does love her, and that they can be together — in fact, that they could become a perfect single being. They push their hands together, into each other's arms. They push their bodies together and feel their skins melt into each other. They push their mouths together and silence themselves, becoming one person.

Neither can bear it well, but their hallucinations and memories allow the sound creature to finally express itself. It considers itself their daughter, created when the TARDIS first vworped in and caused the very first sound waves to enter the environment. The creation of sound caused the dead organism to become out-evolved, replaced instantly by the superior sound creature. In order for the sound to survive, its parents must now also die, so it politely asks the Doctor and Charley to kill themselves. The Doctor refuses at first, but he can't explain why he'd make a Heroic Sacrifice for Charley, but not for his own offspring. So he relents, seeing no way out — but in the end, it's Charley who refuses life to her own daughter. Being a mother is all she ever wanted, but not like this, not if she could one day have another, better existence. The sound creature, hearbroken, falls silent.

The glass wall is easily broken with their combined strength. The Doctor toys with the idea of evolving further, becoming everything they want, but they can't bear to be live like this any longer. The Doctor and Charley are able to push away from each other and become two persons again. Hand in hand, they step out into the new world.