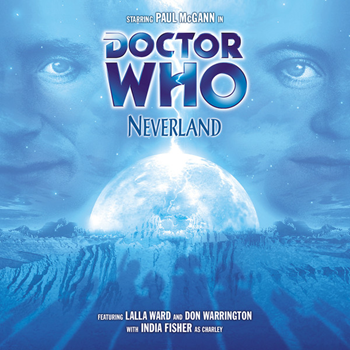 With the Daleks trapped in a time bubble, the Eighth Doctor fully expects that they'll stew for a few hundred years until Romana, now Lady President of Gallifrey, takes pity on them. He also decides that he really needs to talk to Romana about the whole Charley being a paradox thing and time falling apart. So he happily congratulates Charley on her birthday, which by all logic must have happened at some point during their travels, and he tells her he'll just drop her off on a party planet in a pocket universe for about a year until he's sorted stuff out.

Charley won't have it, of course, and calls him a fancy space Peter Pan who lifts young girls from their regular lives and doesn't think of the consequences. But her opinion hardly counts either way when she's captured by a group of Gallifreyans of the Celestial Intervention Agency (C.I.A.) and taken before Romana. They figure out that although Charley is pretty much a nobody, and although the Doctor rescues people all the time from certain death, Charley's rescue set off a freak chain reaction in the web of time. This had let to "anti-time" bleeding through, and "the boys and girls of Never-Never-Land" invading Gallifrey.

It turns out that these "never-people" were all literally erased from time and put in the Oubliette of Rassilon by the C.I.A.'s old Policy of Rassilon. And since no one remembered them, no one in the C.I.A. realised that they were deleting hundreds of people every year, let alone that this is still ongoing. One of them found out and, wrecked by guilt, confessed and ended up being erased herself. She's now taken on Charley's form as a tribute to this interesting new paradox, and feeds on time and time anomalies.

The never-people want to bring anti-time into proper time and see Charley as a very convenient way to bring that about. They brainwash the C.I.A. members and spout religious chants about Rassilon. The Doctor believes that the purported Casket of Rassilon in anti-time is, in fact, just a big ball of anti-time unrelated to Rassilon in any way (after all, he's seen Rassilon's resting place and met the guy, and he was doing just fine). The connected legends about Zagreus all over the universe must also just be a ruse. Without any truth at its mythical core. Because Zagreus can't be real. And Zagreus certainly can't be in the casket, can't be anti-time itself. But...

When time starts looping in on itself, Charley gives the Doctor her grand Anguished Declaration of Love and begs him to just kill her. He throws an Anguished Declaration of Love right back at her and refuses to kill her, instead rushing back into his TARDIS for a last-minute escape plan. He's interrupted by Rassilon himself, who freezes time just to give the Doctor his Fanboy Squee of Rassilon. The Doctor tells him everything that's been happening. With Rassilon's blessing, he then materialises his TARDIS around all of the anti-time, causing it to implode on itself and incorporate Charley's entire time warping into the regular timeline proper. He fully expects to die and to sacrifice the life of the TARDIS as well... without asking her. But they both live, and the Web of Time is healed. It's scarred with inconsistencies, but stable. Charley's existence is no longer a cause for time warping, because the new Web of Time now can't have existed without Charley's existence. A proper paradox.

Rassilon takes a moment to give Romana his blessing as well, and Charley finds the Doctor inside the TARDIS. But it turns out Peter Pan has suddenly changed into Captain Hook. He's growling and snarling at her, approaches her, begs her to stay away, and hits her in the face. When the anti-time imploded, he was at the centre of the impact, and something has leaked through into his mind and turned him into a magnificently Large Ham... Zagreus.