Recap / Big Finish Doctor Who 053 The Creed Of The Kromon 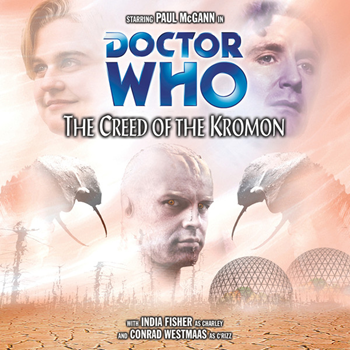 The Doctor acquires a honest-to-God alien companion for once- one who isn't handwaved as a Human Alien, shape-shifter or robot plot device.
Advertisement:

After escaping from the endless nightmare that was "Scherzo", the Eighth Doctor and Charley stumble around the unknown wasteland in search of the TARDIS. The air is breathable, the sky has two suns. They're questioned by a guard inside their heads — the Kro'ka, which will become important in later episodes — and encounter a runaway reptilian slave named C'rizz.

C'rizz had been captured by a race of corporate, bureaucratic, religious, slave-driving, insectoid potions masters called the Kromon. His betrothed, L'da, has been morphed into a maggot queen and impregnated with Kromon children. C'rizz first tries to kill himself, and when the Doctor and Charley stop him, he resorts to killing L'da to put her out of her misery. Everyone's captured and tortured a few times over, and Charley takes L'da's place as the new maggot queen and mother of the new Kromon babies. Although C'rizz insists on giving her a Mercy Killing too, the Doctor rather effortlessly finds a cure and Charley turns back to normal without even remembering anything. C'rizz now has to live with having killed the love of his life for no reason whatsoever.

The Doctor wonders what the planet's second, artificial sun is for, and why no one in this universe knows the word "time" despite understanding the concept of its passing. The Kro'ka reveals that C'rizz is a monk, but doesn't reveal how this is significant.

Experiment over. Next experiment starting.