Recap / Big Finish Doctor Who 054 The Natural History Of Fear 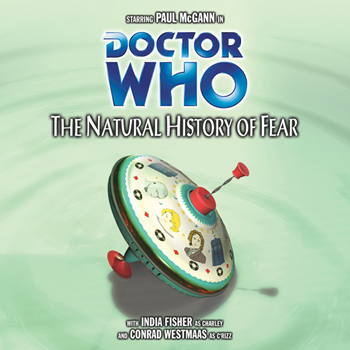 IT IS A CRIMINAL OFFENCE TO COPY OR ATTEMPT TO COPY ANY PERSONALITY OR MEMORY-RELATED ARTICLE SHOWN OR DISPLAYED IN THIS PUBLIC THEATRE, INCLUDING THIS WARNING. note PUNISHMENT OR CONVICTION IS AN UNLIMITED REDUCTION OF AUTHORISED OVERTIME HOURS AND TOTAL PERSONALITY REVISION. YOU ARE NOT PERMITTED TO BRING ANY JUKEBOX OR RECORDING EQUIPMENT INTO THIS PUBLIC THEATRE. THIS WILL BE TREATED AS AN ATTEMPT TO BREACH COPYRIGHT. ANY PERSON DOING SO CAN BE EJECTED AND THE EDITOR MAY CONFISCATE SUCH ARTICLES. WE ASK THE PUBLIC TO BE VIGILANT AGAINST ANY SUCH ACTIVITY AND REPORT ANY MATTERS AROUSING SUSPICION TO THEIR LOCAL CONSCIENCE. THANK YOU.
Advertisement:

A book about the making of this episode, "Unnatural Selection"

, was published by Miwk Publishing.

"This is the voice of Light City. Welcome to your new work day."

Big Brother Is Watching you in Light City. Happiness Is Mandatory. Happiness through acceptance. Productivity through happiness. Questions are forbidden. Questions lead to answers, answers lead to knowledge, knowledge leads to freedom, freedom leads to dissatisfaction, and dissatisfaction to unhappiness. The Infotainment broadcasts teach you what you need to know. The adventures of the Hero and his two companions prepare you for your daily work routine. If you notice any illegal behaviour, report to your Conscience. You will be brought to the Editor for Revision.

One day, a prole worker is reported by his lover for asking questions. In defiance, he throws himself off the walkway to his death, and his lover is brought to the Editor to be Revised. But while probing deeply into the Female's mind and body, the Editor notices something brewing in Light City, and he knows that it has a strange connection to the Infotainment and the adventures of the Hero.

The Revised Female, set up with a new husband and a job as a nurse, reports to her Conscience. She's having a lot of trouble lately. After her latest Revision, she's suddenly able to remember bits and pieces of the Infotainment broadcast as though it were her own life. She remembers the Hero of the broadcast and his two companions, and she can almost — but not quite — remember being part of the group. They were playing in the fountain, having fun and asking questions.

Her Conscience brings her to the Editor. When the nurse realises that the Editor is playing games with her, asking questions, talking about revolution, she naturally reports him to the Conscience. But the Conscience has waited years for her to regain her past awareness. Because he loved her before she was Revised. Her voluntary Revision enabled La Résistance to plant a seed into her mind, during the last Revision process: a painstakingly reconstructed memory disc of the Eighth Doctor, a true hero who inspired the Infotainment broadcasts. The memories were cobbled together by the rebels, incomplete, inexpertly implemented, but there. Deep inside the nurse's mind is the consciousness of the Doctor, unlocked by hearing the sound of a child's spinning top. And with it, she could lead the revolution. Because La Résistance is everywhere. In the unused tunnels underneath the city. In the Infotainment broadcast centre, where the rebels secretly whittled away at the episodes' censorship until the true nature of the Hero could be seen by those who want to see it. The nurse can't bear it, and the Conscience is captured by the Editor when she reports him. The Editor says that he's in on the revolution. He just needs to torture the Conscience a little bit first, just for show. And he just needs to know where the Doctor's memories are stored.

When the Conscience fails to crack under the torture, the Editor becomes ever more obsessed with the nurse and her supposed plans for revolution. He follows her across the metropolis, to the docks, outside the walls of Light City. His mind breaks when, for the first time, he sees a life outside of everything he was taught — shapes, sounds, music he doesn't have words for, the forbidden possibility of another world altogether.

The Editor is brought to the city council, to be Revised for his obsessive behaviour and acts of terrorism. He planted bombs. Not the revolution, just him. After all, there was no revolution. He was the revolution: the only member of La Résistance. The nurse was already Revised into the new Conscience days before. And how can there have been a door to the outside at the harbor, if there is no harbor? Travel is forbidden. Harbors don't exist...

And there's the matter of the Conscience's little toy — a spinning top — which triggers something new in the Editor's memories. The Editor knows he's going mad, but he has to find the nurse, has to find the person who has the Doctor deep inside her mind. And he does find the memory disc: hidden inside the spinning top. Ruthlessly, the Editor destroys it, because he loves the State, he venerates the regime.

The nurse is Revised again, this time into the highest authority: the Censor. Because her latent memories of being Charley Pollard give her a very clear perspective: she wants to be a mother, a mother to the nation. And revolution will happen if the nation is ready: if it doesn't need a mother anymore. But like a spinning top, the nation will revolve only in circles: seemingly moving, but staying in place because of the constant urge for revolution. The Editor remembers, finally, that he's supposed to be the Doctor, and that he's supposed to take care of Charley and C'rizz. The Censor shows him a recording of the Doctor, Charley and C'rizz arriving in Light City, messing around in the fountain, playing with a spinning top and chatting about reincarnation.

The Editor has secretly recorded the whole conversation, and broadcasts it on the screen outside while he and the Censor talk. But the Doctor's mind doesn't matter anymore. With the memory disc destroyed, there's nothing that can bring him back. Outside, and with the Censor's absolute approval, the people see their conversation taking place. The revolution is starting, and the Censor and the Editor watch through the window as the whole city starts crashing in on itself.

The Doctor made his bargain: his memories in exchange for his friends' safety. Had he known his memories would be used like this, he would never have consented... because after he left, their minds were exploited as the axis of the experiment. The Doctor, Charley and C'rizz were only in Light City for one day before they travelled on again. The Editor knows that his memories are a lie, because no one in Light City has two hearts, let alone two legs. The citizens of Light City, programmed with the personalities of the three, have risen above their dystopian nightmare after hundreds of generations, and are ready to be born into a new society.