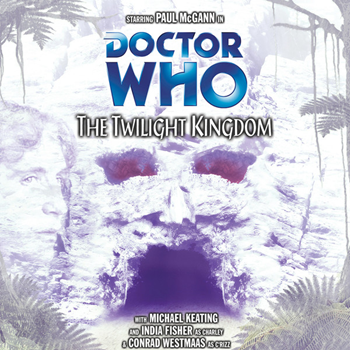 Anytime the entrance to a cave looks like that, it's probably not a good idea to enter.
"My people have a saying: Everything changes, but nothing is truly lost."
—C'rizz

The Kro'ka places the Eighth Doctor, Charley and C'rizz in a jungle for his latest experiment. They're soon captured by a group of military rebels who have been keeping busy with an improvised Apocalypse Now re-enactment. The rebels are holed up in a giant cave, seemingly brainwashed by their Dark Messiah, Major Koth.

As the heroes stumble about and fail to get anything done whatsoever, something deep inside the cave starts probing at the Doctor's mind and decides it can use the Doctor for its purposes. It's also, however, telepathically causing Charley and C'rizz to become extremely crabby, and they lose their will (and soon enough, ability) to leave the cave at all. The entire rebel population has been trapped for years, without realising they're being held captive. They survive off the slimy nutritious soil that grows on the cave's surfaces.

The Doctor takes an inordinate amount of time to figure out that the cave is a giant sentient venus flytrap, and that it went berserk in all the wrong ways when it accidentally absorbed Koth. This turned it into somewhat of an Eldritch Abomination. The cave's next plan is to absorb the Doctor, which — after some teasing involving the TARDIS — it does. The Doctor uses this to his advantage, because being part of the cave allows him to control it if he concentrates. Unfortunately, this will eventually kill him, and he doesn't like to think about what would happen if he'd regenerate while part of a giant slimy cave monster. Fortunately, the local scientist makes a Heroic Sacrifice instead of the Doctor, and kills the monster by overloading its mind with The Power of Love.

The Kro'ka once again mocks the Doctor, and lets slip that he does understand the word "time". The Doctor has had enough of the Kro'ka's games, and realises that he was right all along: the planet is a laboratory, and everyone they've met in the past couple of months has been a test subject. He has no choice, however, but to keep playing, and the heroes head off into the next experiment. The Doctor also reveals what he hoped to find by diving into the Divergent universe: Rassilon.