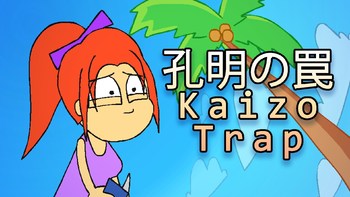 The concept of a game sucking players in is nothing new, but what if that game were a Platform Hell sort, a la Kaizo Mario World? This is the challenge ahead of an (initially) unnamed heroine who ventures through (and dies to) numerous obstacles and is bombarded in every way possible with a barrage of threats in order to save her partner, who was sucked into the game itself and is being held captive by the console.

Named after the trope of the same name, Kaizo Trap

is a 2015 web animation by Guy Collins, with music by Leslie Wai. It is a loving tribute to platform hell games, of which Collins is an avid player himself. It is also, however, a sort of game in and of itself, as Guy created five endings for it, and it's up to the viewer to find them all. (Sadly the game no longer works; see the Trivia page for more details.)

In November 13, 2021, an actual playable recreation

of Kaizo Trap is in the works, being developed by CyberPunk64Bit and Draker, with approval by Collins himself. The game is still in an "ultra-beta" state according to Collins, but more features will be added in the future. The development of the Kaizo Trap game can be checked on CyberPunk's channel

, and the game itself can be downloaded off the site.