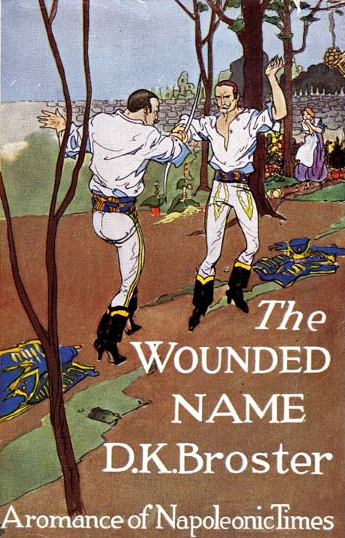 "None but the guilty can be long and completely miserable."
Advertisement:

Originally published in 1922 by British novelist D.K. Broster, The Wounded Name tells the story of Laurent de Courtomer, whose noble family left France for England as a result of the French Revolution. After Napoleon abdicates the French throne in 1813, Laurent prepares to return to France with his family, but not before meeting a legendary hero of the French forces — Aymar de la Rocheterie, also known as L'Oiseleur. Aymar's exploits in the army, both real and mythological, have spread far and wide among the Royalist populace. He and Laurent become fast friends, and Laurent in particular finds himself infatuated and lost in hero-worship.

When he finally does move to France, Laurent joins the Royalist Army. He intends to meet with Aymar again during his tour of duty, but is captured by Imperialist forces along the way. However, he soon discovers that Aymar himself is not only a fellow prisoner, he is severely wounded and disgraced — the Imperialists found him tied to a tree after Aymar's own men apparently tried to execute him. He is an outcast, now; the Royalists consider him a traitor and the Imperialists consider him an enemy prisoner. But Laurent is not swayed. As the only friend Aymar has left, Laurent is determined to help his hero heal both physically and mentally as he tries to deduce the truth behind the charge of treason and the botched execution.

Essentially a book about The Power of Friendship and The Power of Love, The Wounded Name details the development of the two heroes' deep affection for one another, as well as the heroic Undying Loyalty which comes to define Laurent's character.

As this is not one of Broster's most famous works, it has been out of print for quite a while. Most copies available today are more than 80 years old. It can be read online and downloaded for free here

(the archive misspells the title as "The Wounding Name").

Tropes seen in this work: