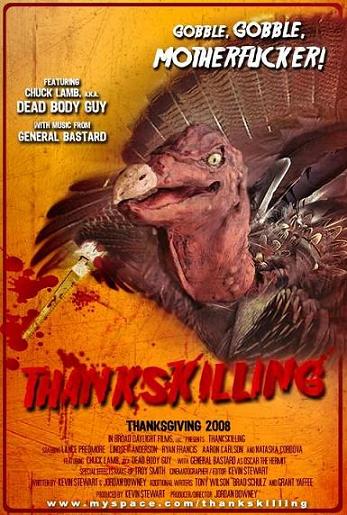 This is one turkey you will not be giving thanks for!

ThanksKilling (also known as Death Turkey) is a comedy-slasher film released in 2009.

In 1621, after being slighted by pilgrim Chuck Langston, skilled shaman Feathercloud used powerful necromancy to resurrect a turkey as a monster, which proceeded to massacre the pilgrims on the first Thanksgiving Day, before entering a state of hibernation.

Five-hundred and five years later, college student Kristen Roud and her friends - Johnny, Ali, Darren and Billy (who is descended from Langston) - are heading to their respective homes for Thanksgiving break, just as the evil turkey wakes up, killing a dog who found him in the process. Pursued by the dog's revenge obsessed owner, Oscar, the turkey embarks on a killing spree, intent on wiping out Kristen, her friends, and everyone else he comes across.

This film was the first film featured in Achievement Hunter's Theater Mode.

2012 saw the release of a Kickstarter-funded sequel called ThanksKilling 3.