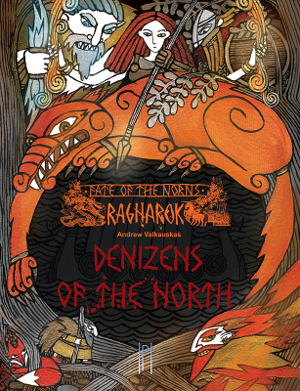 Fate Of The Norns: Ragnarok [1]

was released in 2013. It is the new version of the Fate of the Norns tabletop RPG, created by Andrew Valkauskas in 1993.

The game is set in Midgard, land of the vikings, during Ragnarök. The sun and moon have been devoured by celestial wolves, an eternal winter called Fimbulvinter has set in, and Viking families tear each other apart, while the great armies of the Aesir gods (Odin, Thor, ...) and the Jotuns (Surt, Bergelmir,...) gather for the final confrontation, where the world will most likely be bathed in fire and cease to exist. Oh, and crusaders from the south are invading, bringing the faith of a new White God to the masses, by force if necessary.

FOTN:R uses the Runic Game System: no dice are needed to play this game, but a set of viking runes, representing the player character's experience and destiny. A small subset of runes is drawn during each combat round, and the player can use them to perform various actions (each rune is bound to a specific power) and greatly change the output of said power via meta tags (e.g: double damage, multi attack, greater range, etc.).

The player character (called "Dweller") can choose between 5 character classes, each one having 3 possible specializations. A grid system is then used to choose every action and power the Dweller can perform, so that lots of customized builds are possible.

Death is not the end of a player character in FOTN:R: with the proper burying rituals and a bit of luck, a deceased PC can be raised in the Heavens to become an immortal warrior of the Gods or the Giants, gain new immortal powers, and go on more adventures if the GM (here called the Norn) wants him to. Having a character ascend in the heavens will also unlock new customization options for new characters.

Fate of the Norns: Ragnarok provides examples of the following tropes: