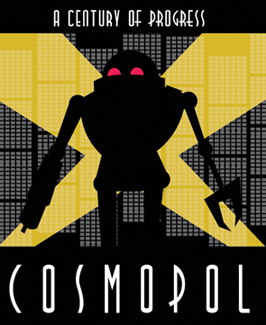 Giant robot is giant.
"The ladder of success is best climbed by stepping on the rungs of opportunity."
- Ayn Rand
"Cosmopol: a utopia to some, a dystopia to others - anything you want can be yours... but if you fail, it means you're a bad person."
- Dreia Melinkoff
Cosmopol is a Tabletop RPG setting by Dreia Melinkoff.
Advertisement:

It is set in an alternate timeline where The Great Depression (and thus the rise of Those Wacky Nazis) never happened, and for the hundred years after, history, politics, and technology evolved in a different direction.

Most of the action takes place in the North American city of Cosmopol or its gloomy European counterpart, Neustadt.

Tropes in this system: