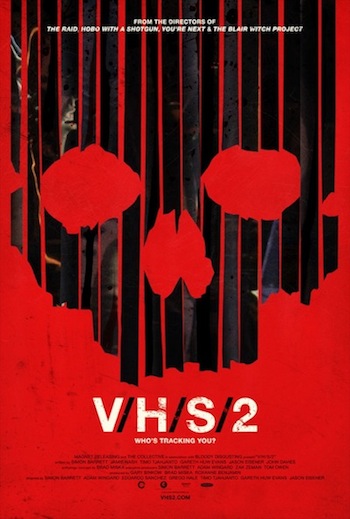 A pair of private investigators bust into a house to find a missing college student and discover a bunch of tapes, one among which reveals what happened to him.

The film has received mostly positive reviews from critics who praised the clever irony and human melodrama in each segment (especially "Slumber Party Alien Abduction" which had immature, jerkass teenagers banding together against aliens). In contrast, the first V/H/S movie earned mixed reviews and critics saw the sequel as an improvement.

open/close all folders
In General
Tape 49
Private investigators Larry and Ayesha break into a missing college student's house to find out why he went missing and that is where they discover his stash of VHS tapes. This is the wraparound segment.
Phase I Clinical Trials
Herman gets an ocular implant with a camera, but it suddenly makes him see ghosts. A young woman, Clarissa, joins him on the quest to escape the ghosts.
A Ride in the Park
A bike rider who runs into the middle of an unexplained Zombie Apocalypse in the park gets bitten by a zombie and turns into one. He then becomes a crucial catalyst of the apocalypse.
Safe Haven
A news channel crew investigates an Indonesian cult.
Slumber Party Alien Abduction
A group of children and teenagers engaged in a "friendly" prank war amongst themselves get abducted by aliens.