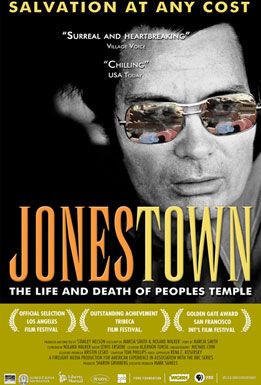 "What lesson can we learn from this?" 'BYOB'?"
Advertisement:

Jonestown: The Life and Death of Peoples Temple is a 2006 documentary by Stanley Nelson, which aired in 2007 on PBS' American Experience. It charts the story of Jim Jones and his Peoples Temple from their noble beginning in The '50s, to their controversial history in San Francisco in most of The '70s, to the notorious mass suicide at their Guyana compound on November 18, 1978. The film lacks any narration, instead allowing the story to be told by former Temple members themselves and archive footage of Jones.

The film is noted for being much more respectful about the event than other TV documentaries, some of which have tried to replay the story from a more sensationalistic angle. Jonestown takes a more subdued route and treats the carnage dead seriously. It received the Outstanding Achievement in Documentary Award at the Tribeca Film Festival.